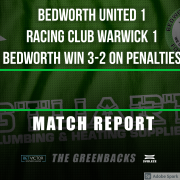 Bedworth travelled the short distance to face Racing Club Warwick on a big day for the home side not only was it an FA Cup Preliminary round game but it was the last game on Racing Clubs grass pitch which is due to get replaced by a 3G surface with works starting on Monday.

Stuart Storer chose a strong side to start with which included recent signings Sam Walton and Kyle Barnett.  With Ishmael Dawson on the bench all but one of Stu Storers summer signings looked to feature.

Bedworth, playing in their new home kit for the first time started the game at a high tempo not allowing Racing Club to settle and within the first few minutes this nearly paid off when after nicking the ball off Rowley in the RCW defence won a corner.  Mulders swung the corner in and Piggon rose highest (as he did for most of the game to be fair) but the Bedworth number 9 couldnt guide his header goalbound and the ball went just wide.  It wasn’t long though when the high press The Greenbacks were playing paid off when Truslove again stole the ball off Rowley but this time the end result was Bedworth taking the lead as Truslove drove into the RCW box and fired off a shot which was well saved by Ganley in the RCW goal but the rebound fell back to Truslove who put the ball into the net at the second attempt to score The Greenbacks first goal of hopefully many this season.

The half played out with Bedworth the better of the 2 teams with the 2 new additions Walton and Barnett marshalling the back line well Dan Crane was a virtual spectator for the first 45 minutes (His time would come later).  The game started to get a bit niggly with the referee stopping play on numerous occasions and having a few discussions with players.  Midway through the second half Maphosa for RCW was fortunate to stay on the pitch when already on a yellow he clattered through the back of Blythe in the centre circle leaving The Greenback man in a heap but only received a stern talking to.  RCW were looking to play on the break with the pace of Jackson on the RCW left looking like their main threat but the during the first 45 minutes he was kept under wraps and not allowed to open his legs and sprint away.  With little more than 5 minutes of the half left Bedworth were forced into a change when after clearing a cross Punter stayed down on the turf and was replaced by Rowe.

Bedworth started the second half in much the same as they finished the first but the exertions of playing the high press for so long seemed to be taking its toll as RCW were starting to get a foothold in the game.  Jackson was starting to see more of the ball and was using his pace to good effect delivering a couple of dangerous crosses which Crane and his defence handled well.  The RCW equaliser though came from a Greenbacks corner which was cleared Rowe miscontrolled the ball which was fired out to the RCW right hand side and then delivered into the edge of the box where it fell kindly to Smith who gave Crane no chance with his shot low to Cranes left.

RCW were lifted by the goal and it looked like Bedworth were now the team holding on Jackson was coming more into the game and on one occasion broke into the box but Crane stood up strong and blocked his shot.  With mere seconds on the watch Blythe broke into the RCW box and was caught but stayed on his feet and shot weakly at the RCW keeper.

Man of The Match:  Dan Crane for 3 penalty saves which took the pressure of The Greenbacks takers and ultimately won the tie for Bedworth.