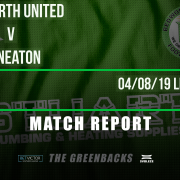 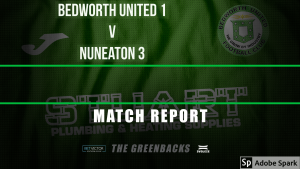 Saturday saw the Greenbacks travel the short distance to visit Liberty Way to take on Nuneaton.

Stuart Storer was still without the injured Ashanti Pryce and Iyesden Christie. Also absent were Richard Blythe, Elliott Parrott and new signing Charlie McConnachie. The returning Luke Rowe was left on the bench due to him only getting back into the country early hours of Saturday morning.

Nuneaton started with an extremely strong 11 with Luke Benbow and Devon Kelly-Evans leading the line it looked like it was going to be a tough day for the Bedworth backline.

The game started with neither team really getting any time on the ball and both teams were cancelling each other out with Bedworth looking to pick out Piggon and Nuneaton looking to Benbow to hold the ball up. The first real chance fell to the home side when Clifton for Nuneaton in the 7 th minute was allowed space out on the Bedworth right and cut inside to let fly from about 30 yards out but the trialist in goal for Bedworth did well to tip it onto the bar and watch as it bounced the right side of the goal line for the Greenbacks and was then cleared away.  This lifted Nuneaton who then had a spell of pressure resulting in 5 corners all of which were well defended by the Bedworth back line with Dudley and Sharpe both winning the ball in the air well to clear the danger.  From one of these corners though it was Bedworth who would strike first when the ball came out to Chester who beat his man it looked like the ball was going to run out but with Chesters pace he got there put a great cross into the box which was met by by Piggon who with  a brave header beat Nuneaton captain Belford to give the greenbacks a 1 nil lead after 15 minutes.

Nuneaton then went on the offensive but never really troubled the Bedworth keeper even after winning numerous corners and were restricted to shots from distance which were either blocked or sailed harmlessly over the bar. Troke at the other end came close with a dipping volley after some good interchange between himself, Piggon and Chester.  With the half drawing to a close it looked like Bedworth would go into the break with a lead but with less than 5 minutes remaining a low cross into the box was collected by Benbow who’s little touch found Edmonds who finished well to cancel out Bedworth’s lead

Bedworth started the second half with the same 11 as the first, with the first few minutes of the second half both teams were again cancelling each other out. Bedworth though then started to get a foothold and again Piggon Troke and Chester combined this time with Piggon coming close with a volley from distance. The ever dangerous Chester then wriggled free to only be upended to give Bedworth a free kick which Troke tested the keeper with who claimed at the second attempt. Unfortunately though it was to be an error that led to Nuneaton taking the lead when a ball into the box from Powell was not collected by the on trial Keeper who allowed Edmonds to nod home easily.  Chester then came into his own and was a constant threat down the Bedworth right and was unlucky on a couple of occasions not to level the score or set someone else up, but it was Nuneaton who would have the final say with a bit of one touch football in the Bedworth half ending up with Harkin one on one with the Bedworth keeper who he rounded with ease to put the ball into the empty net.