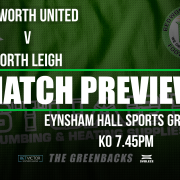 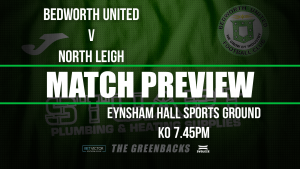 Bedworth are expected to travel to North Leigh again on Tuesday night knowing 3 points will keep them firmly in contention for a playoff spot come the end of the season.  North Leigh are currently sitting 11th in the league 2 places below The Greenbacks,  Both teams have games in hand though on those above them.  North Leigh will be desperate for the 3 points as this will catapult them back into contention for one of the playoff places as well.  North Leighs record reads Won 12 drew 2 Lost 11 with their most recent result a 2-1 win at home against Aylesbury.  Bedworth have yet to play North Leigh this season the Oxfordshire side will be the last visitors to The OVAL.

If Bedworth can claim all 3 points then they will rise to either 6th or 7th position dependant on goal difference.  Bedworth will be travelling with a full strength squad who even though they only drew on Saturday they will be buoyed by recent results.  The Greenbacks are hitting a good run of form just as it matters with the playoff places now within touching distance the players will need no motivation as they know a decent run will secure one of the those places in the playoff lottery come the end of the season.  With our destiny in our hands lets get behind Stu Storer and the team and be their 12th man for the last few games of the season.  Lets pray that the weather does not transpire against us again as if it does we will be having a very busy March and April.

Jamie is A class
Scroll to top