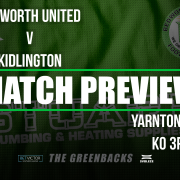 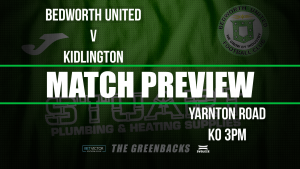 Bedworth hope to travel into Oxfordshire again this weekend to face Kidlington (if the weather holds out). Hopefully this time a ball will get kicked and the journey wont be wasted as it was Tuesday night when the Greenbacks travelled to North Leigh to hear the match had been called off at the last minute.

Kidlingtons season so far has seen them gain 24 points from their 20 games played so far.  Their record of won 7 drew 3 lost 10 sees them sitting 16th in the league.  Kidlington have had a few postponements of late and have not played in the league since the 4th November with away trips to Daventry and a home game on Wednesday night against Dunstable all falling foul of the weather.  Their last outing saw them gain a creditable 1-1 draw at home against high flying Halesowen.  Previous to that they started 2020 with a 3-0 loss away to Thame United.  Boxing day saw Kidlington host bottom of the league Wantage Town , Kidlington needed an 87th minute winner to deny Wantage their first point of the season.  With only 6 points separating 10 teams this game will be a lot closer than league positions suggest.  Kidlington manager Julian McCalmon will be without Centreback Tommy Franklin who is suspended after his sending off in the draw against Halesowen.

Bedworth are one of the in form teams in the league with 5 wins from their last 7,  their early season form is the only reason why they are not occupying one of the playoff places now.  Bedworth’s beat Kidlington at The OVAL courtesy of a goal a piece from Mitch Piggon and Alex Troke.  The only other trip into Oxfordshire, apart from Tuesdays wasted journey, was a victory way back at the end of August against Thame United.  Bedworths record against the Oxfordshire clubs so far this season has been 100%, on top of the away win at Thame the Greenbacks have chalked up home wins against both Didcot and Wantage.

Bedworth will be going into the game high on confidence and will be looking to do the double over Kidlington and 3 points will aid their push towards them playoff spots.  Bedworth will be travelling with a fully fit squad with the only exception being Cal Templeton who is serving his suspension for the red card he received in the win against St Neots last Saturday.  Greenbacks fans will be hoping that Mitch Piggon can continue his goal scoring run having scored in 4 of Bedworths last 5 games.  Add to that Luke Keen getting his name on the scoresheet last week in his first full start, the Greenbacks seem to be finding goals a lot easier to come by of late. Bedworth though will be looking at keeping a clean sheet as they have failed to do so since the end of November but saying that Dan Crane has been in decent form pulling off some impressive stops at important times in games to ensure that Bedworth take points.  With the British weather being as unreliable as it is please keep following the clubs official Twitter for updates as to the chances of the game being played.  We can 100% assure you though that Dunstable at home the week after will on.