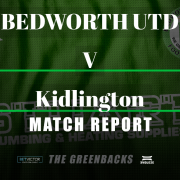 The Greenbacks travelled down to Kidlington with a much depleted squad.  With Reece Blackmore suspended and 7 other players on the treatment table it was always going to be a tough game.

Bedworth though started on the front foot with more attacking intent than the home side but not being able to find a final ball to test Lawrence in the Kidlington goal. It was Kidlington though who would have the best chance of the game when a hopeful long ball forward saw Sam Walton with shades of Steven Gerrard slip leaving Callum Harvey a straight run on goal with only Walklate to beat but the Kidlington marksman somehow managed to sky the ball well over the crossbar.  Ishmael Dawson was busy working hard and midway through the half after a collision ended up with a nosebleed for his troubles and had to change shirt. Both teams had penalty appeals for handball waved away by Matthew Perry the referee who definitely wasn’t making friends with either team after some strange decisions.  The Greenbacks were putting plenty of balls into the Kidlington area but unfortunately there wasn’t a yellow shirt on hand to push the ball goal bound.  Bedworth’s best chance of the game was a cheeky little lob from Connor Deards which beat Lawrence but just went the wrong side of the post.

The second half started with Kidlington having their best spell of the game but Sam Walton and Kyle Barnett stood firm and weathered the long ball aerial assault.  The game then started to become a war of attrition with both sides committing fouls in the midfield which effected the flow of the game.  On the 60th minute though Bedworth took the lead when a ball deep into the Kidlington area was met by Jorrin John who Blayed the ball back across the goal and Dawson from a yard out couldn’t miss and put the injury ravaged Greenbacks into the lead with only half an hour to play.  Kidlington reacted and brought on all 3 of their substitute’s in quick succession.  Bedworth were still creating chances as Kidlington pushed forward with both Josh Steele and Elliott Parrott having goalbound efforts blocked in quick succession.  It wasn’t all Bedworth though substitute Billy Gillert had a reasping shoot which young Walklate in the Bedworth goal did well to turn round the post.  Kidlington did have the ball in the back of the net when a ball in was headed straight up in the air headed forward by a Kidlington player but the striker who put the ball in the net was adjudged to be offside. Dawson had a shot on the turn after some good work down the Bedworth left but Lawrence pulled off a great save to prevent the Greenbacks going further in front.  With time ticking away it was Kidlington that equalised with 6 minutes of normal time to play a long throw into the Bedworth Box was met by the head of Gillett who powered a header past Walklate.  With time still to play Bedworth went on the attack and after a corner was only half cleared the ball was put back into the Kidlington area Parrott met the ball on the volley but Lawrence in the Kidlington goal pulled of a world class save to prevent the Greenbacks skipper from claiming what surely would have been the winner.

Man Of The Match:  Sam Walton after an early slip grew into the game and prevented Kidlingtons long ball from causing problems and when needed made the tackles that mattered.