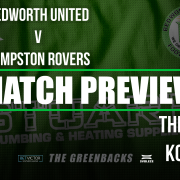 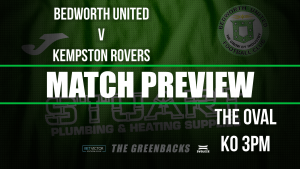 Bedworth host Kempston Rovers for their first visit to The OVAL.  Kempston currently sit 18th in the league table with only St Neots and Wantage beneath them so they will be looking for a positive result to move themselves out of the bottom 3.  Kempstons last game saw them well beaten 5-0 by Halesowen the week before that though they visited high flying Corby and won 2-1 only conceding in the last minute.  Previous to their victory against Corby they went down by the odd goal in 3 to local rivals Bedford Town.  They will be without recent returnee Sam Johnson after his sending off against Halesowen.

The Greenbacks’ current form is slightly better than the league table suggests, having picked up eight points from a possible eighteen in their last six matches and were a little unlucky to leave Aylesbury last week with no points after leading at half time.  At the time of writing Stu Storer will have a full strength squad to choose from with the only exception being Dan Preston after his straight red last week.  If other games go in The Greenbacks’ favour a win Saturday could lift them into 10th place and with the busy Christmas program approaching and games coming up against teams around us this is an opportunity to start the climb up the league.

We would like to thank Pebble Pictures for sponsoring Saturdays game: