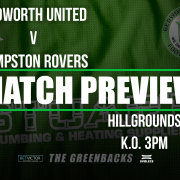 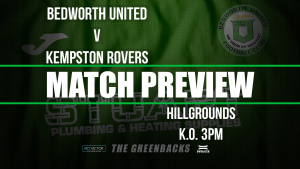 Bedworth travel into Bedfordshire looking to keep their unbeaten in 6 record going against Kempston Rovers.  Kempston find themselves just out of the relegation place down in 19th place 13 points ahead of Wantage.  Both teams will be looking for 3 points for different reasons. Bedworth to keep in that tight group hunting down the playoffs and Kempston to keep as much distance between themselves and Wantage.  In the game at The OVAL in November Bedworth won 2-1. Goals from Mitch Piggon and Alex Troke put Bedworth into the lead at halftime. Kempston fired back with 15minutes to play but with 5 minutes left saw Finn Brennan sent off after needlessly throwing the ball at a Bedworth player.  Brennan is no longer at Kempston having returned to parent club MK Dons.  This will be Bedworths first visit to Kempstons Hillfields ground.  Kempstons record reads won 5 drew 2 lost 21.  Their last couple of games have yielded no points with a 4-0 away loss at Halesowen and a 2-0 defeat away at Bedford.  You have to go back to the 1st February to find Kempstons last point and that was a 1 all draw with Kidlington. You have to go back to December the 21st to find the last time Kempston have claimed 3 points and that was a narrow 1-0 away win at Berkhamsted.  You have to look at the end of November for the last time the home crowd at Kempston saw a win and that was a 3-2 victory over Dunstable.  2 of Kempstons 5 victories have come against high flying Berkhamsted and Corby so The Greenbacks best not think their task in hand is easy.

Bedworth come into the game on the back of a 2-1 Vistory against fellow promotion hopefuls Aylesbury.  Bedworth took the lead through a Liam Truslove goal only to see Aylesbury equalise with 15 minutes to go.  Then step up the most unlikliest of scorers in Rich Blythe, with a bit of help from the Aylesbury keeper he made sure all 3 points stayed at The OVAL.  The Greenbacks win condensed the race for the playoff places even more with 4 teams now sitting on 44 points and Aylesbury holding that elusive 5th play off place with 49 points,  the 2 games Bedworth have in hand could majorly effect the final outcome come May.  Bedworth after the game Against Kempston have to play 2 of those teams also on 44 points in Biggleswade and Yaxley. Bedworth come into the game with the only notable absentees being Dan Preston and recently returned Khaeelem Bailley-Nicholls who .  Bedworth will be on a high after taking all 3 points against a very good counter attacking side in Aylesbury.  It seems the Greenbacks are hitting form at the right time of the season again but with still a lot of football left to play I am sure there will be a lot of speed bumps to navigate along the way during the next 13 games.

Watch the highlights of the last time the 2 teams played below:

Volunteer of the Month
Scroll to top