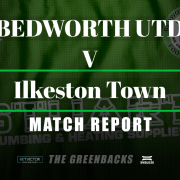 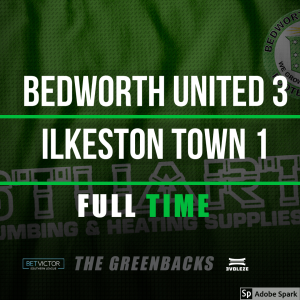 Bedworth hosted Ilkeston Town in the FA Trophy Preliminary Round.  Both teams cam into the tie on the back of a Good run of form Bedworth gaining 7 points from the last available 9 and Ilkeston sitting 4th in the Northern league table so both teams were looking to build on that success in the Trophy.

Bedworth again kept faith with 11 who started their last 2 league games and they couldn’t have asked for a better start when inside the first 10 minutes a long ball from Ricardo Dudley evaded the Ilkeston defence missing everyone its way through and Bailey-Nicholls found himself with time to slot the ball through the keepers legs to give Bedworth the lead.  The goal seemed to stir Ilkeston into life and they then had a sustained period of pressure but they could not get past the Bedworth back line of Punter, Dudley, Rowe and Parrott who were equal to everything Ilkeston could throw at them.  Bedworth though were looking dangerous on the break with Troke, Blackmore and Piggon all having chances that narrowly missed the target.  With half an hour gone Ilkeston though were thrown a lifeline when the Referee awarded them a penalty for a handball from Blackmore, Bedworth protested looking for a foul themselves with Blackmore claiming he was pushed in the back bu the protests were waved away.  Blackmores protests led to him being yellow careded and after a long pause in play  while the referee sorted everything out Ilkeston could eventually take the penalty.  The Penalty was struck well to Dan Cranes right but the Bedworth keeper dived full length and pushed the ball round the post to keep Bedworth in the lead.  Less than 2 weeks ago Dan was in hospital having his finger put back into place after a nasty dislocation against Corby but this week with the same hand he sent Bedworth into half time with a 1-0 lead.

Ilkeston came out in the second half determined to level the score being a cup game they needed to attack and put pressure on Bedworth but still the Bedworth back 4 and keeper were equal to everything that Ilkeston had to offer. Bedworth though weren’t without their chances, Parrott being unlucky with a header from a corner and Templeton just not putting enough power behind a shot from just outside the box which had it gone in would have opened his goa lscoring account for the club, It was Bedworth though that doubled their lead when Bailey Nicholls this time turned provider whith a low cross into the box which Mitch Piggon picked up turned his defender and his angled shot beat Durrant to give Bedworth the breathing space of a 2 goal lead.  Ilkeston threw everything forward then and were rewarded when a cross into the box was met by the head of Marshall 3 yards out to half the lead. Ilkeston then pushed hard for the equaliser which was leaving gaps at the back which Bedworth were doing well to exploit.  Ilkeston though were putting the pressure on with Parrott, Dudley and Punter all getting good blocks on goal bound shots.  The one shot from Marshall that did get through was saved brilliantly again by Crane to keep Bedworth in the lead.  Bedworth though were creating chances on the counter and it was one such attack that led to that man again Bailey-Nicholls who with five minutes remaining finished the game off after A good move with Crane throwing the ball out quick to Rowe who travelled into the Ilkeston half played the ball into Piggon who in turn passed the ball out to Bailey-Nicholls who in acres of space bore down on the Ilkeston Keeper and expertly finished make the score 3-1.  The last 5 minutes saw Ilkeston try to get the game back but the only nervy moment came when the ball bobbling around the Bedworth eventually fell to Marshall who let fly but Troke again threw his body in the way and blocked the balls route to goal.  Bedworth then managed the game well and saw them progress into the next round.

See what Stuart Storer had to say after the game

Sad passing of a Bedworth stalwart
Scroll to top