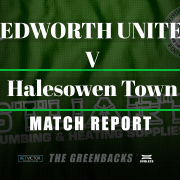 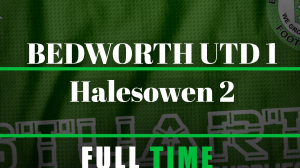 Bedworth hosted Halesowen for third encounter already of the season between the 2 sides.  Stu Storer picked a much changed side from the last time these 2 teams met. With Mitch Piggon on the bench the job of leading the line fell to Khaellem Bailey-Nicholls who has impressed when he has come on as sub against a few teams.  New signings Blaize Punter and Dan Preston both started along with Cal Templeton. in much changed back line.

The game started at quiet a pace with neither team really dominating Bailley-Nicholls had an early chance of a poor back pass but his shot hit the side netting.  Blackmore then put the same player through with a neat pass but this time Bailey Nicholls was upended by Piggott and Bedworth got the free kick. From the resulting free kick Halesowen broke at pace down the left with the ball eventually ending up at the feet of Bowen who cut in along the goal line and squared the ball to ex Greenback Montel Gibso to open the scoring within the first 5 minutes, the blow of going behind was then made worse when in the build up to the goal Dan Crane had  badly dislocated his finger and needed hospital treatment.  With no second keeper on the bench it was Mitch Piggon who stood up and donned the gloves.  The rest of the first half was really even with no team really testing either keeper,  the board indicated 3 minutes of added on time and it looked like the half time score was going to stay at just one nil but with the final kick of the half the ball again fell to Gibson who finished well past stand in keeper Piggon.

The second half started in much the same way as the first half with neither team really stamping their authority on the game.  Piggon was doing well in the Bedworth goal winning a few one on ones and equally the Halesowen keeper was being tested a little more but mainly from distance with 20 minutes to go Bedworth gave themselves a lifeline with substitute Rowe delivering a perfect corner to be met by the head of Parrott who powered it past the keeper to give Bedworth a well deserved goal.  Bedworth pushed forward looking for that all important equaliser which left gaps at the back, stand in keeper Piggon though stood firm making some great one on one saves to deny Halesowen a third.  unfortunately though as much as The Greenbacks pushed forward Halesowen stood firm and spent the last 10 minutes wasting as much time as possible frustrating the Bedworth bench, players and supporters alike.