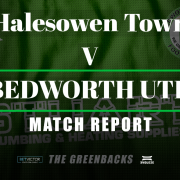 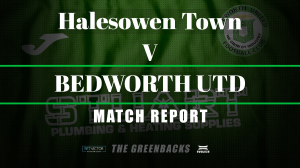 Bedworth travelled the short distance to visit title chasing Halesowen on the first day of the new year.  The only change from the win against Daventry on boxing day was Rich Blythe dropping to the bench allowing Olly Mulders his first start in a greenbacks shirt.

Neither team really got a hold of the ball, the first 10 minutes of the game saw the ball pinging around in the midfield.  Halesowen then grew into the game quicker than the boys in green and started to retain possession they broke the deadlock when a ball was played into Gibson on the edge of the box who looked like he controlled it with his arm, who then layed it off for Bunn to fire past Crane.  Bedworth players were not happy with the decision to allow play to continue but the goal stood.  Halesowen bouyed by the goal then put more pressure on the Greenbacks defence and could have been out of sight had it not been for Dan Crane pulling off 3 very good saves to Deny Bunn Molyneux and Gibson with 15 minutes of the half remaining Bedworth then came more into the game with Troke shooting narrowly over and Piggon having a shot saved bt Catlow in the Halesowen goal.  Bedworth were rewarded for their attacking intent just before halftime when Ali took Luke Rowe down from behind in the box and the referee duly pointed to the spot.  Alex Troke stepped up to take the penalty but saw his shot bounce of the underside of the bar.  Straight from the rebound Crane was again called into action tipping a goalbound shot just wide of his post from Molyneux.

Bedworth started the second half looking like a different side and from the restart were on the offensive.  Bailley-Nicholls showed some quick feet and set up Blackmore who saw his shot whistle just wide.  Bailley-Nicholls again beat his man on the right and pulled the ball back to King who had had just come on seconds before, King couldn’t quiet get his feet right and his shot screwed off his foot wide of the gaping goal. Bedworth for the start of the second half looked the most likely to score showing a lot more attacking intent than the home side who resorted to long balls looking for Gibson which were easily dealt with by the back line of the 3 Ps Parrott, Punter and Preston.  It was one of these long balls though that led to Halesowen doubling their lead when with 20 minutes to go of the half the ball was pumped long, Gibson with his back to goal looked to foul Parrott who was left on the floor in agony then turned and fired past Crane.  Parrott after the challenge was unable to continue and was replaced by Templeton.  Dan preston was incensed with the decision and was duly booked for his reaction and complaint.  5minutes later Bedworth were caught out chasing the game Templeton made a good tackle that unfortunately broke free to Bunn whos first time shot beat Crane to but the home side 3-0 in front.  Templeton met a corner late on which hit the post and was then cleared from danger.  Crane had time to pull off 2 more spectacular saves to deny Halesowen a forth after Bedworth were caught on the break looking for the consolation goal. With time ticking Bailley-Nicholls seemed to pull up holding his hamstring with no one around him.  With no more attacking options on the bench Mark Albrighton came on for his first appearance of the season in a rather unorthodox strikers position.

Man of the Match Dan Crane for some world class saves that kept Bedworth in the game at half time and constant motivation of those around him.

Midway point of the season catch up
Scroll to top