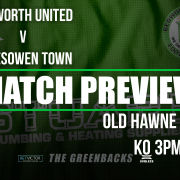 Bedworth travel the short distance to Halesowen to lock horns with the Yeltz for the forth time this season having faced them twice in the FA Cup and once in the league already this season.

Halesowen are one of the favourites for the league this year currently sitting third but with 3 games in hand on those above them. Having won 12 of their 15 games played they will be looking to extend that run against The Greenbacks.  Having drawn against Coleshill on boxing day they no doubt will be looking to start 2020 with a win.  Ex Greenback Montel Gibson has been on form for Halesowen this season netting 13 times in the league and sitting second in the leagues top scorers.

Bedworth come into this game on a good run of form themselves with 3 wins out of 4 and the only loss being the game against Coleshill where the referee had a lot to say in the result.  Bedworth though have some injury doubts with Mitch Piggon, Luke Rowe and Richard Blythe all picking up knocks that required them to be substituted against Daventry on Boxing Day.  Mentioning the leagues top scorers The Greenbacks must be happy that they have had goals coming from all departments not just strikers.  Bedworth will be looking to avenge the narrow 2-1 defeat that they suffered at The OVAL in September, fingers crossed(no pun intended) Dan Crane will finish the game on the pitch and not in hospital with a dislocated finger like the last time the teams met, even though Mitch Piggon on the day was a more than capable stand in.  Bedworth are a much changed side from that game and with the current run of form will fancy their chances to kick 2020 off with a positive result.