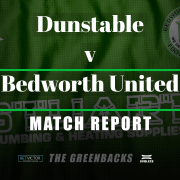 Bad day at the office 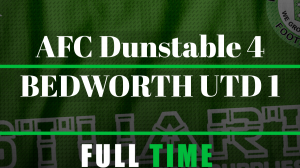 Bedworths line up saw starts for new signings Dan Preston and Blaize Punter in the heart of defence Luke Rowe returning to the starting 11 and Ashanti Pryce also started, Bailey-Nicholls who was recovering from illness, Cal Templeton Josh Steel and the absent Lewis Chester were the changes from the last Game against Corby.  In front of the second lowest attendance in the league of only 69 people Bedworth started well with Troke and Piggon winning a number of flick ons but unfortunately there wasn’t a green shirt to take advantage.  The game was held up for 5 minutes as the referee after 15 minutes of play realised that there was no corner flag.  It was Dunstable though who took the lead in the 19th minute after a throw into the Bedworth box was only half  cleared it was picked up by Ashton Grant just inside box who’s first time shot took a wicked deflection of Parrott trying to block and left Crane in the Bedworth goal wrong footed. Things then went from bad to worse when a minute the same player doubled Dunstables lead when from a Bedworth ball the ball was stolen and fed into Grant who got the wrong side of his man and easily placed the ball past Crane.  Bedworth huffed and puffed but apart from a couple of decent crosses there wasn’t really much to write home about.  Things went from bad to worse for the referee after not noticing a corner flag was missing he then took a ball to the back of the head and ended up on the floor bringing about the biggest cheer of the day.  Dunstable with near enough the last kick of the half then went even further in front after a low cross was met by Crawley at the near post to put Dunstable 3 goals to the good at half time.

The second half started with Bedworth pushing forward looking to get that early goal but the final ball wasn’t happening and couldn’t beat the Dunstable centre backs on the occassions we did get through shooting was woeful and we couldn’t capitalise on the chances we created.  Bailey-Nicholls although struggling with illness came off the bench and started to make things happen with his pace and strength and it was after some good work from him down the right in the 93rd minute won a free kick. Rowe swung the ball in it was met by the head of Troke who gave the keeper no chance and at least got Bedworth on the score sheet.  Dunstable weren’t finished though and straight from the kick off won a free kick on the edge of the Bedworth box and Taylor Rhiney with the last kick off the game bent it round the wall and past Crane to make the final score 4-1.