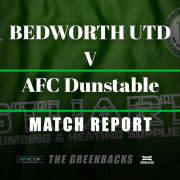 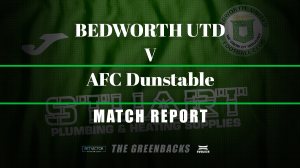 Bedworth faced off against visitors AFC Dunstable at The OVAL.  The Greenbacks made 2 changes from the 1-0 win away against Kidlington last Saturday with Alex Troke came into the starting line up for Mitch Piggon and Blaize Punter coming in which saw Ricardo Dudley dropping to the bench. Bedworth came flying out the blocks and took the lead within 2 minutes of the start when a ball from Dan Preston found Alex Troke on the edge of the box who volleyed the ball past Dunstable goal keeper Green to put Bedworth into an early lead. The goal sparked Dunstable into life and they came more into the game forcing Bedworth into a rear guard action Bedworth were doing well to repel the aerial threat that Dunstable were exerting on the back 3 with Preston, Parrott and Punter limiting them from shots from distance.  When they did get a clear shot Crane was equal pullling off one full length save to his right and doing well to block a point blank effort after a corner where the follow up then hit the angle of the bar and post to keep Bedworths slim lead intact.  With the clock ticking into injury time in the first half Dunstable were awarded a very soft free kick when Nathan Frater backed into Elliott Parrott and blew the whistle and awarded the decision against Parrott.  The ball was delivered into the box and to add further insult to Injury it was Frater himself who prodded it home for 3 yards out to equal the score.

The second half continued in the same vein with The Greenbacks boys being put under pressure.  The break through eventually came on the hour mark when a ball was played into the rightback position.  The normally assured Punter could not sort his feet out in time and allowed Christie to beat him whos low cross was met by Rhiney to put into the empty net.  Bedworth huffed and puffed for the remaining half hour forcing Taylor in the Dunstable goal into a couple of decent saves but pushing forward was leaving gaps at the back and on the occasions when Dunstable did break Crane again pulled off some fine stops with a one on one against Christie of particular note.  Bedworth had a very good shout for a penalty waved away when Blythe was upended in the box but yet again the referees decision was dubious.  This led to the Bedworth box being incensed and ended up with Jamie Lenton being cautioned for questioning to much. Into injury time Dunstable sealed the game when this time Christie was the scorer when he raced through and this time beat Crane to put the game beyond The Greenbacks.  In a scrappy game that saw 12 bookings the Bedworth lads came up short and swapped league positions with Dunstable, with the Greenbacks dropping to 9th and Dunstable climbing to 7th.

Man of the Match  Parrott as voted for by match sponsors DNR Fillongley.