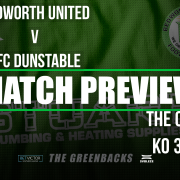 Bedworth will host Dunstable on Saturday in their 4th game in 11 days.  Dunstable have played 3 times in the league this season losing 2-1 away to Biggleswade on the first day of the season then beating Didcot by a solitary goal then most recently losing 3-1 to Wantage Town on Tuesday night.  Dunstable have played 5 cup games in amongst their league outings most recently going out of the Emirates FA cup to Vanarama National league south side Hemel Hempstead 2-1 last Saturday and the Saturday before that going out of the FA Trophy 2-1 to Isthmian south central side Tooting and Mitcham.  In the meetings between The Greenbacks and Dunstable last season Dunstable ran out winners both times.

Bedworth will be reeling from losing their unbeaten record on Wednesday night away to a strong Corby side.  Stuart Storer will be looking for a reaction from his side and with players coming back from injury he will have a chance to shuffle his pack.  Up until Wednesday the greenbacks had been in a vain run of form scoring 11 times in their first 4 games a run of results that saw them become early pace setters in the Pitching in Southern Central league.  Speaking to some of the players the mood in the camp is that they let themsleves down on Wednesday night and didn’t perform to the high standards they have set themselves this season,  but as a group they have watched that performance back and have had honest words with each other.  The senior members of the squad have spoke at length to the junior members about learning from the game Wednesday night and I am sure that there will be a reaction tomorrow as Stu Storer has said before its a marathon not a sprint and during a marathon you will always hit hurdles and its how you deal with those hurdles that count.  The squad have prepared as well as they can for what will no doubt be a tough game against a side that is well organised and will be looking to build on their results from last season.  Saying that though I am positive whichever 11 start  will go into this game with a point to prove and will be looking to get back to winning ways straight away.

Stuart Storer will still be without the injured Blaize Punter and Lynus King.  But on the positive side Liam Truslove will be back available after completing his suspension and unfortunately not being available due to personal reasons on Wednesday night.