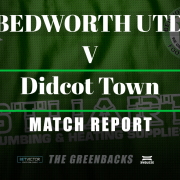 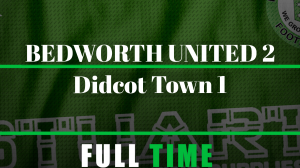 Bedworth went into the game looking to build on their current run of good form having taken 7 points from the previous 9 available in the league and progressing in the FA Trophy, which has seen them score 10 and only concede 2.  They went into the game without the presence of Dan Crane in goal who was replaced by Paul Evans.  Apart from that Bedworth went with the same team had performed so well against Ilkeston the week before.  Bedworth started the game well building play and their efforts were rewarded as early as the 8th minute when after a good move involving Troke, Piggon, and Blythe Reece Blackmore arrived late on the scene to a lofted through ball and with great technique he volleyed the ball first time low and hard to Bedwells right and watched as the ball whistled past the keepers right hand to end up nestling in the corner of the net.  Reece not being the most prolific of scorers looked as stunned as the Didcot players and looked like he wasn’t sure how to celebrate.  Bedworth though after the jubilation of that were soon brought crashing down to earth when straight from kick off the ball ended up at the feet of Didcot’s George Reid who with one touch steadied himself and let fly a sublime shot to beat Evans and even up the score.  Bedworth pushed forward and were by far the team who looked like they were more likely to take the lead.  Bailey-Nichols, Troke and Blythe all had chances to but the Grennbacks into the lead which missed the target.  Bedworth also had a strong penalty appeal turned down when the a blocked shot looked like it hit the Didcot defenders hand in the penalty area.  If possession and chances won matches in the first half Bedworth would have been out of sight,  but unfortunately the final balls weren’t matching the build up play and the teams went in at half time level.

Bedworth started the second half a little bit slower than the first and allowed Didcot a bit more of the ball but after 10 minutes Bedworth again lifted themselves and were keeping possession of the ball well but again that final ball was the only thing missing Piggon had a good shot well saved from a tight angle, Bailey-Nichols had one blocked.  Didcot were looking to play on the break and one such break saw Didcot substitute Stanley look like he had broke free but Elliott Parrott with a Bobby Mooresqe style challenge stopped him in his tracks.  with 7 minutes to go though Bedworth’s pressure paid off when the ball ended up at the feet of Bailey-Nichols who worked to get half a yard and fired the ball past Bedwell in the Didcot goal for his 7th goal of the season, 6 of which have come in the last 4 games.  Bedworth then sensibly played the clock down to the final whistle to keep all 3 points here at The OVAL.  Bedworth have now taken 10 points from their last 4 league games and are now looking upwards rather than downwards in the league.  On this form Bedworth will not be scared of any side and will look to continue their good run of results into the game next week against Biggleswade in the FA Trophy.  For those wishing to travel to Biggleswade there is a coach which will be leaving The OVAL at 10.45 for only a tenner.