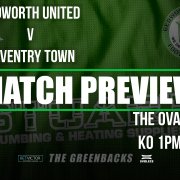 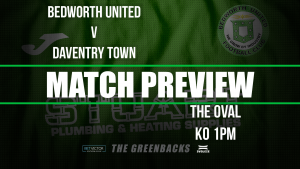 Please note fixture is a 1pm Kick off

With the Turkey beening eaten, the presents unwrapped and crackers pulled its time to get back to the football.  Boxing day sees Daventry Town visit The OVAL after the Greenbacks last 2 games being postponed it will be good to get to watch the Greenbacks in action.

Daventry are currently sitting 9th in the league after playing 18 games with a record of won 8 drew 2 and lost 8.  Daventry’s last match was a 2 nil win at home to North Leigh previous to that they had drawn 2-2 with Dunstable and Lost 3 nil to Berkhamsted.  The visitors have had a turbulent couple of weeks behind the scenes with manager Arron Parkinson resigning then reconsidering his decision and returning.  Daventry will be without Luke Emery for this game after his sending off in the late stages of Daventrys last game.

Although Bedworth are currently 6 places behind their opponents they have 2 games in hand having only played 16.  Should they get maximum points in those games they will rise above their visitors.  For those who think that teams should have a mid season break, like in the continent their wishes have come true this season due to the weather.  Having 2 away games now cancelled at North Leigh and Biggleswade The Greenbacks will be desperate to get back into competitive action.  The squad has been bolstered by the arrivals of Luke Keen from Coleshill and Olly Mulders from Redditch.  With the time off it has allowed Stuart Storer and his backroom team a lot of time to work with the players. They have also been out and about scouting and watching some of our up and coming opponents.  With a full squad to pick from it is going to be a tough decision which 11 to start.