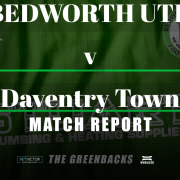 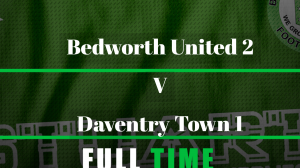 The visitors started the game the better of the 2 teams putting pressure on the Greenbacks but the green defence stood firm and limited Daventry to few opportunities. Dan Preston was dominant in the air breaking up a lot of Daventrys attacksq It was Bedworth though who broke the deadlock when Rich Blythe won the ball on the halfway line played it wide to Ricardo Dudley who crossed for Mitch Piggon who finished first time past ex Greenback James Martin in the Daventry goal.  It wasnt long before Bedworth doubled their lead when Alex Troke was upended on the edge of the Daventry box and Luke Rowe stepped up and with his left foot rifled the ball into the net. The game started to get scrappy with neither side being able to get a grip with the ball spending most of it’s time in the midfield and possession being gained and lost by both teams.  Daventry halved bedworths lead with 10 minutes left of the half when Orosz crossed for Bowen to put into the net from close range.

Half time saw Luke Keen replace Mitch Piggon due to injury. Within minutes Bedworths other goal scorer Luke Rowe hobbled off to be replaced by debutant Olly Mulders.  Within minutes if the restart it was evident that Daventry were looking to turn the game into a physical battle with some “robust” tackling.  Elliott Parrott seemed to be in the wars more than most with one particular tackle from Confue leaving him in a crumpled heap. Much to the crowds displeasure the already booked Confue was only talked to on another day he could have easily seen red.  The game didn’t get any chance to flow in the second half and chances were at a premium when they did come though both Crane and Martin between the sticks were equal to them.  With time running out Luke Keen broke free saw his shot from a tight angle palmed out by Martin with the goal at his mercy Troke following up was unlucky to see his shot go over the bar.  That would have killed the game off but The Greenbacks then controlled the last few minutes and kept the 3 points at The OVAL.

Man of the Match Reece Blackmore