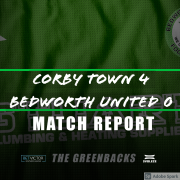 Bedworth travelled down the A14 to face off against Corby Town.  Things didn’t go to plan from the start when the minibus with the Greenbacks players on couldn’t fit under the height restriction this was a sign of things to come as things didn’t improve once the game started.

Stu Storer made 1 change from the team that beat Thame on Saturday with Josh Steele dropping to the Bench being replaced by Sam Walton.

The first half started with Corby on the front foot with Diggin, Sandy and Crawford causing The Greenbacks rear guard problems from the start.  It was a Bedworth freekick though that saw the first real chance of the game but instead of The Greenbacks benefiting from it it was Corby who cleared and broke with pace down the right hand side with 2 Corby players free in the box the cross came in and Blackmore acrobatically tried to clear the ball but only succeeded in diverting the ball towards the top left hand corner of Cranes goal. Everyone thought this was going to be the breakthrough for Corby but somehow defying the laws of physics and gravity the giant frame of Dan Crane clawed the ball away to save Blackmores blushes. It wasn’t long before Crane was called into action again this time pushing a well struck shot from Westwood round his right hand post.  Crane was fast becoming Bedworth’s saviour when he made another top drawer save this time from Diggin low to his left hand side.  Cranes resistance though was broken in the 25th minute when again Corby found themselves with a man over on the right hand side and this time the ball fell to Westwood who thundered the ball into the top right hand corner of Cranes goal from just inside the area.  Bedworth did have a half chance when Dawsons low cross found Piggon but the ball bounced up awkwardly at the last minute and Piggon couldn’t get his shot away.  Corby went on the attack again and Crane again had to save from Diggin to keep the ball out of the Bedworth net.

With the Halftime tea still warm in the cups Bedworth found themselves 2-0 down in the second minute of the half a corner from Corby was adjudged to have been handled in the box by Piggon and the referee duly pointed to the spot.  Crane could not repeat his heroics from the penalty shoot out against Racing Club Warwick and Diggin duly dispatched his spot kick sending Crane the wrong way. Within 10 minutes Diggin had his second and Corby’s third after beating the offside trap and dispatching the ball past the on rushing Crane.  Any chance of a Bedworth fightback was ended when with 15 minutes left to play Crawford scored Corby’s forth and condemned Bedworth to their first defeat of the season.

Man Of The Match  Dan Crane for 4 outstanding saves which kept Bedworth’s hopes alive in the first half.

Player moves on
Scroll to top