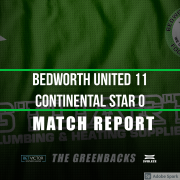 Bedworth travelled the short distance up the M6 for their second pre season friendly and went back to their roots.  The Bedworth lads were in less salubrious surroundings than they have previously been used to and this was brought home when before the game Andy Penny was caught removing dog pooh from the pitch.  This game had the potential to be a banana skin for the Greenbacks after their defeat to Ashby Ivanhoe on Saturday.

Stuart Storer started with a strong team with what on paper looked like quiet an attacking line up.  This proved to be the right plan as within minutes of the kick off Truslove having 2 chances to put the Greenbacks ahead but for Star defenders blocking shots. It wasn’t long though before the Greenbacks pressure paid off when Keen picked up the ball out wide on the left and found Piggon who turned and shot right footed into the corner of the Star goal to put Bedworth ahead.  It wasn’t long before Bedworth doubled their lead this time from the penalty spot after a Star defender tried to get a piggy back off Dudley.  Keen turned from provider to scorer as he sent the keeper the wrong way to put the Greenbacks 2-0 in front. Bedworth kept pressing and this time from a corner Keen was unmarked at the back post to put the Greenbacks 3-0 up.  Keen then turned provider again crossing for Piggon to put a header past the helpless Star Keeper. Bedworth looked like scoring everytime they attacked and Keen completed his Hat Trick when a clever lofted ball from King was flicked on by Piggon to allow Keen to put past the keeper again.  Minutes later Dudley again was brought down in the box this time Piggon stepped up to put the ball in the net to complete his Hat Trick as well. 2 hat tricks in the first half hour saw the Greenbacks lead by 6.  That was not the end for the first half as Dudleys shot from 30 yards was well saved by the Keeper who just couldn’t hold it and it spilled to Blythe a yard out to prod home to make it 7-0 at the break.

The second half saw a wealth of changes from the home side in an attempt to stem the flow of goals but within minutes of the restart Bedworth added to their tally when a long ball was chased down by Keen the Star Keeper decided to punch only for the ball to fall to Mulders who sent it back over the keepers head for 8.  Bedworth then added a 9th when a trialist put in a cross to the far post which Piggon headed home, The game then got a bit stop start with Subs and silly little free kicks which broke up the flow of the game, this didn’t stop the Greenbacks from adding to the score though this time a short freekick to Mulder on the edge of the box who dispatched a shot which went straight into the bottom corner of the net to put Bedworth into double figures. with seconds left Bedworth added their final and 11th goal of the game after a good cross from Dudley picked out a trialist who headed home from 6 yards out.

Bedworth Travel to Coventry Sphinx on Saturday hoping to build on this result and kick on going into the start of the season.