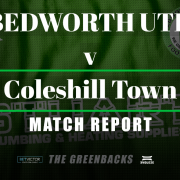 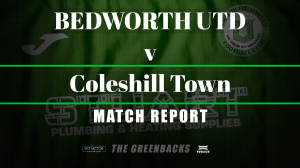 Saturday saw Bedworth host Coleshill at the Oval in which would turn out to be a very eventful game indeed for all the wrong reasons.  The Greenbacks started by far the better of the 2 sides looking to keep the ball and dictate the game.  King, Punter, Troke and Piggon all came close to opening the scoring but their attempts were all just wide of the mark.  With just 18 minutes played though Bedworth did have the ball in the Coleshill net, Alex Troke dispossessed Joe Halsall about 30 yards out from the Coleshill goal advanced and from the edge of the box beat Paul Hathaway in goal,  but The Greenbacks joy was short lived when the referee who took a long time to decided eventually called play back adjudging that Troke had won the ball Illegally and awarded Coleshill a free kick.  Both benches were perplexed at the decision as neither saw anything wrong with Trokes challenge.  This was the start of things to come with the referee making a few decisions that both sides found hard to believe.  Dan Preston was lucky to get away with a challenge in front of the Bedworth box that on another day might have seen him receive a card.  The only other effort in the first half of note was when Dan Crane did well to tip over a snap shot from Zazi.  WIth the scores even at half time both teams were thinking that the game was there for the taking still.

The second half started with Bedworth on the front foot but unfortunately for the Greenbacks it was Coleshill who broke the deadlock when a Bedworth attack broke down and Washbourne and Rankin combining with the latter left footed dispatching the ball past Cranes right hand into the net after it looked like Parrott had been fouled in the buildup..  Coleshills lead lasted less than a minute though when from the kick off Bedworth went straight on the attack winning a free kick out on the right Luke Rowe swung a delightful ball in and Elliott Parrott rose above everyone to bullet the header past a helpless Hathaway.   The second half ebbed and flowed with both teams having opportunites to take the lead.  With 8 minutes left on the clock the game really sparked into life when Bailey-Nicholls showed great strength to out muscle the Coleshill number 2,  he let fly with a looping shot from outside the box that Hathaway could only watch as it ended up in the net to give the Greenbacks the lead.  Then it was time for the referee to take centre stage Parrott made a great tackle in the box winning the ball but in the referees eyes he was adjudged to have fouled the Coleshill player.  Molesworth stepped up and put the ball past crane to level the scores again.  2 minutes later it was Coleshills turn to feel robbed by the referee when Preston took his man down in the area but this time play was waved on.  Play then went up the other end with both Piggon and Preston having chances that went begging.  Then into injury time the ball found itself out wide and the cross came over and Molesworth was there to fire past crane from 6 yards out.  Bedworth again felt robbed by the referee as the ball had gone out for a goalkick before the cross was made which Molesworth finished.

Man of the Match Elliott Parrott

For Highlights of the game please follow the link below.