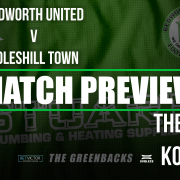 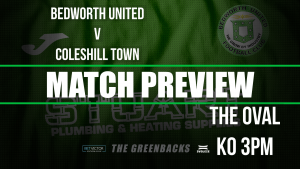 Bedworth welcome Coleshill Town to The OVAL on Saturday with both teams looking to gain 3 points to climb the table in search of one of the play off places come the end of the season.  Coleshill are currently 8th in the league table only 1 point better off than the Greenbacks but having played a game more.  Of late Coleshills results in the league have been up and down with their last game being a 3-1 away win at Bedford courtesy of a George Washnbourne hat trick but previous to this they had lost to both Kidlington 3-1 at home and Bedworths opponents last week Yaxley 3-2 away . Coleshills record is played 16 won 7 drew 1 lost 8 with 5 of those losses being on their travels.

They will though be buoyed by the return of last seasons Skipper Joe Halsall from his short stint at Northern Premier division side Sutton Coldfield.  Coleshil also have Bedworth old boy Barry Fitzharris amongst their ranks who will no doubt be looking to get one over on his old team mates.

Bedworth come into the game on the back of 2 wins,  a 2-1 home victory against Kempston and a very good away 1-0 away win at a cold and foggy Yaxley last week.  After a poor start The Greenbacks will be looking to carry on where they left off in the last 2 games and are starting to look upwards to the playoff places rather than down at the relegation spots.  Bedworths management looked at the run of games we currently have and have targeted these matches as games that we must work hard to get something from.  The previous two this one and the next 3 could possibly have a big bearing on where The Greenbacks finish the season.

Stu Storer has no real injury problems ahead of the game so will have a full strength squad to pick.  His biggest selection issue is who to start after some of the youngsters who have come in have performed extremely well pushing some of the more senior players for a place in that coveted starting 11.  Its a nice problem for a manager to have though.