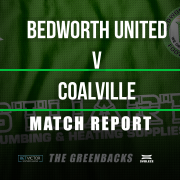 Stuart Storer picked a strong side to Face Coalville in The Greenbacks first game at The OVAL since March.  Coalville were sitting just outside the playoff places in the Southern Central Premier division when Covid cut short last season.

Bedworth started off well with Blythe having a snap shot within the first minute that flew just over the bar.  Coalville though had the better of the chances early on though with a couple of long balls causing Bedworth issues but both times Crane was equal to the shot.  Bedworth were looking to move the ball quick with Josh Steele delivering some great Balls in from the right that just evaded a green shirt, Piggon was winning flick on after flick on against the Coalville Centrebacks.  Crane was again called into action when a cross from the Bedworth left was met by a Coalville head the ball seemed to be heading into the far corner but the strong hands of Crane full length kept it out.  Coalville then started to put the pressure on and were pinning the Greenbacks back but a mix of good goalkeeping and strong defending kept the score at half time goalless.

The second half started much the same as the first finished with Coalville looking the stronger of the 2 teams,  Eventually the Greenbacks resistance was broken when a ball was played into the Coalville striker who thundered a shot from just inside the box giving Crane no chance.  The goal seemed to spark Bedworth back into life Piggon was still working hard winning flick ons and it nearly paid off when a flick on found Dudley on the right who thundered a shot which was goalbound the Coalville keeper managed to palm it out to substitute Dawson who fluffed his lines and shot wide.  With 10 minutes to go Blackmore went down and had to come off and after having used all of their Subsitutes Coalville were happy to keep the game at 11 a-side and allow one of the substituted Bedworth players on to replace the injured Blackmore,  The referee though wasnt happy so again Mark Albrighton donned a kit and played out the last 5 minutes in his new flourescent yellow boots.

Man of the Match Josh Steele