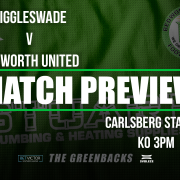 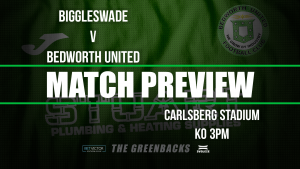 Bedworth travel into Bedfordshire to face Biggleswade on Saturday knowing that 3 points is vital if they are to sustain a push for the top half of the table before the end of the year.

Biggleswade currently sit 2 points behind The Greenbacks in the league table.  They do have hand with a record of won 4, drew 4 and lost 7.  Biggleswades last win was away against the leagues bottom club Wantage where they ran out 4-1 winners.  Their last home game in the league was way back on the 9th November and was a 5-0 loss to second in the table Berkhamsted.  They share a ground with step 3 Biggleswade Town who narrowly defeated the Greenbacks 2-1 in the FA trophy so the trip will be a familiar one to the Bedworth lads.

Bedworth come into the game still looking to avenge the defeat against Coleshill were they feel they were robbed, unfortunately due to the British weather they could not do that last week at North Leigh after the game was postponed due to a waterlogged pitch.  Taking away the Coleshill game the Greenbacks have started to pick up points are still hanging on the coat tails of the teams in the playoffs.  The way things are looking now April will be an exciting time with a lot of teams still having their eyes on that elusive top 5.  The Greenbacks will have a full strength squad who have been put through their paces this week and last.  They should be chomping at the bit to get back on the pitch and play.  Bedworth will be bouyed by the signings of both Olly Mulders from struggling Central Premier side Redditch,  and the returning Luke Keen who has netted 9 times for Coleshill already this season both will be available and looking to break into the starting 11.

Due to the weather forecast and the amount of postponed games at Biggleswade of late please keep following the clubs twitter account for updates on the pitch.