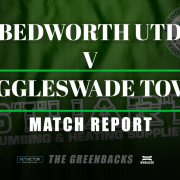 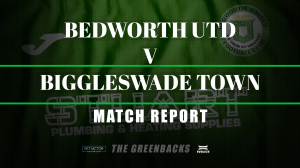 Bedworth travelled down the M1 to face Southern Premier League Biggleswade in the FA Trophy.  After a great result in the previous round against Ilkeston The Greenbacks went into the game confident they could get a result.

The game survived the onslaught of the British weather but to protect the pitch both teams had to warm up outside the ground.  The game started with Biggleswade on the attack gaining a number of corners which were all defended well by Bedworth who were playing in their change kit of all yellow.  Even with all the Biggleswade pressure it was Bedworth who tested the keeper first.  After a good bit of play by Bailey-Nicholls giving the ball to Piggon who shot but just didnt have enough behind it to trouble Donkin in the Biggleswade goal.  It was Bedworth though who broke the deadlock.  When a mix up at the back for Biggleswade saw Bedworth win a corner.  Blackmore floated it in and the ball landed at the feet of Punter who had time to take a touch, then smash the ball home from 5 yards out.  The rest of the half was an evenly matched affair with Bedworth coming the closest after Piggon won a free kick which he touched on for Rowe who shot inches wide.

Biggleswade came out in the second half a lot more determined to not lose to a lower level side and were looking to put the pressure on early.  Bedworth were starting to get pushed back and the equaliser looked inevitable when it did come it was from a quick short corner which the Bedworth lads weren’t alert to.  It was then floated to the back post where the Biggleswade attacker put the ball into the net.  This lifted Biggleswade and Bedworth were finding it hard to get out of their own half.  On one of the rare occasions they did a corner was swung in by Blackmore and substitute Preston was unlucky to put the ball over the bar.  Unfortunately though it was Biggleswade who scored the all important second goal when a low cross into the box was collected by the Biggleswade player who turned his marker and fired past Crane.  Bedworth pushed forward and with mere seconds left on the clock were denied the replay when Piggons turning shot hit the underside of the crossbar and unluckily for The Greenbacks dropped the wrong side of the line and spun out that was the last real action of the game.  The Bedworth lads looked understandably deflated at the final whistle but no-one could say that they didn’t put the effort in.  Stu Storer and his management team have to now lift the boys for next Saturdays game against top of the League Berkhamstead.

Bedworth United Ladies on You Tube
Scroll to top