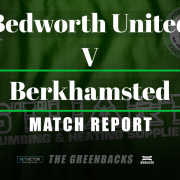 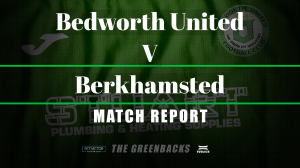 Bedworth traveled to Berkhamsted on the back of a good run of form but Berkhamsted were unbeaten.  It was the first time Bedworth had visited Berkhamsted. The game was played in driving rain, which didn’t really help a team looking to play football with the going underfoot extremely slippy and the ball skidding on.  Berkhamsted started the game on the front foot and were looking to play the long ball at every opportunity to release either the leagues top scorer Toomey and his strike partner Chamberlain.  It didn’t take long for that approach to pay off as a ball over the Bedworth defence was pounced on by Toomey, Crane did well to save with his knees but Chamberlain was quick to react and put the ball into the net to give Berkhamsted the lead.  Bedworth hadn’t recovered from that goal when another long ball was picked up by Toomey in the left back position who’s cross was met 2 yards out by Chamberlain to put past Crane and double the lead after only 9 minutes.  Bedworth fought back and rallied and forced a number of corners but could just not find that killer ball, Piggon did test Leon in the Berkhamsted goal but his shot was pushed wide for another corner.  Crane pulled off another good save from a Kinnane header from a Berkhamsted corner.  Bedworth huffed and puffed but could not find the final ball to put Leon in the Berkhamsted goal under any pressure.

Bedworth started the second half much the better of the 2 teams and started to put a lot of pressure on Berkhamsted but were leaving a few gaps when they were pushing forward.  Berkhamsted did well to block 3 shots in one phase of play from Bailey-Nicholls, Blythe and Rowe. It was again another long ball this time picked up by Lacey who crossed from the Bedworth left and Toomey was on hand to put the ball into the net to give Berkhamsted a 3-0 lead against the run of play  Luke Rowe did let fly from 30 yards and score to give Bedworth something to cheer about after the long journey.