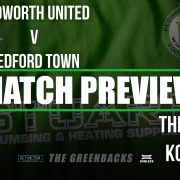 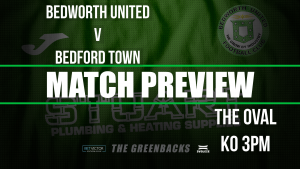 Battle of the Beds

Bedworth host Bedford in the league this week with both teams having aspirations to climb into playoff contention come the end of the season.  Bedford come into the game on the back of a win against Kempston Rovers coming from behind to finish 1-0.  Bedfords start to the season hasn’t been bad with a record of 5 wins 4 draws and 1 loss which sees them sitting just inside the playoff positions in 5th place.  Bedworth on the other hand come into the game after a 3-1 loss away to Berkhamsted which is a scoreline that flattered the hosts as The Greenbacks were by far the better side but struggled to come back after conceding two early goals.

Bedworth come into the game with a fully fit squad after talking to Stu Storer he was impressed by the introduction of the some of the newer players to the team and their attitude.  It was good to see Lynus King make his Greenbacks debut from the bench and did well in his first outing.  Dan Preston seems to be making an impact in the team and showed on Saturday that he doesn’t like losing, hopefully that attitude will spread through the rest of the squad.

Bedworth have played well of recent and their home form has improved they hope to continue that form into this game and come out of the Battle of the Beds with all 3 points.