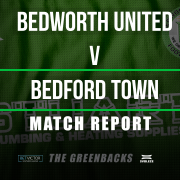 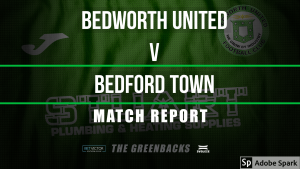 Bedworth started with the same 11 that started in the 2-2 draw against Berkhamsted the Saturday before.  The only change was Dan Preston returned after illness to the bench in place of Mark Albrighton.  The game was one of only 2 not postponed in the league and the pitch showed as early on players from both sides were struggling to find their grip. Bedworth started well with Luke Keen firing wide early on.  Bedworth won a corner and were unlucky not to score when Jamie Greygoose in the Bedford goal failed to collect and the ball bounced around but was eventually cleared.   Bedford didnt take that as a warning and the next corner was swung in from Rowe and this time the ball fell kindly and Blaize Punter hammered the ball home from a yard out.  This seemed to spark the game into life and after a good run from Blythe Dudley this time fired wide. It wasn,t all one way and Dan Crane performed heroics at the other end Palming away a Mensah header after a Bedford free kick was swung into the far post. Crane was again on hand to preserve Bedworths lead when Tomlinson cut in from the right and fired an effort towards Cranes near post which he again kept out.  Hall for Bedford was lucky to stay on the pitch after a coming together with Troke it looked like the Bedford man swung a foot which connected with Trokes face,  The referee was unsighted and no action was taken. with seconds left of the half Bedford broke and Tomlinsons shot looked like it was going in but for a fantastic one handed save by Crane.

The second half started with Bedworth on the attack this time it was the Greygoose in the Bedford goal that performed heroics keeping a Troke shot out at full length. Troke again came close volleying a Rowe cross just wide of the mark. Tomlinson did manage to dink the ball goalbound but this time Mulders was there to hack it clear and prevent the equaliser. Bedford started to push players forward in search of the all important equaliser. Tomlinson had a chance but screwed his slot wide. Tomlinson again broke free but Crane again kept it out palming it over.  With Bedford pushing forward it left gaps at the back and Keen broke free put the ball across to Edwards-John who couldnt get his feet right and screwed his shot wide of the open goal.  Bedworth were looking to hold on with 5 minutes of added on time it wasn’t to be when when the ball found its way out to Dan Walker on the right hand side he cut inside and put the ball just out of Cranes reach with the last kick of the game.

Man of the Match  Dan Crane