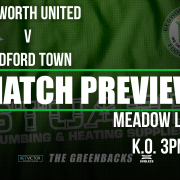 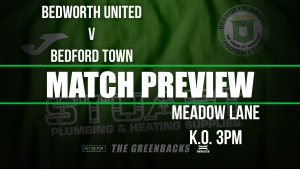 Bedworth Travel down the M1 to face Bedford Town on Saturday looking to keep in touch with the playoff places.  Bedford are currently sitting 15th in the league but as we have seen this season league positions mean nothing.  With the league being so condensed with 6th place and 15th place only separated by 10 points a couple of wins can put teams right back into playoff contention.  Bedford have been busy in February bringing in a wealth of new signings for the final months of the season to bolster their hopes of being in the mix come the end of April.  Last time out Bedford hosted Kempston Rovers and ran out 2-0 winners their only win this calendar year. A run of 8 games picking up only 1 point has severely dented their playoff hopes with Saturday being the first time since the 14th December that they have tasted victory.  Bedfords record reads Won 9 Drew 6 Lost 11 with a return of 33 points and a goal difference of minus 9.  Bedford were one of the form teams in the league when we last faced them here at The OVAL having been on an unbeaten 8 game run.  Bedworth were cruising at 3-1 up with goals from Piggon, Parrott and Bailey-Nicolls but somehow ended up only drawing the game after Bedford scored 2 goals in 9 minutes to make the score 3-3 and probably went home the far happy of the 2 teams on the day.

Bedworths season has been the exact opposite to Bedfords with a poor start but since the 2 teams met 14 games ago The Greenbacks have suffered defeat only 4 times. In November when the teams met Bedford were in 5th place and Bedworth were in 16th so it seems that roles have been reversed since the last time the teams met.  Bedworth were due to travel to North Leigh on Tuesday but unfortunately the weather yet again has said its say and caused North Leigh to have issues with floodlighting so that is another game that will need to rescheduled.  With fixtures now mounting up and only 2 months of the season left to play The Greenbacks will be now have to play a few Saturday, Tuesday, Saturday to get all their fixtures completed before the end of the season.  Bedworth will be travelling with a full strength squad with Stu Storer still away it will be newly qualified UEFA A license coach Jamie Lenton and Andy Penny in the dugout for Bedworth.  With new signing Kiaro Edwards-John available the competition places in the starting 11 is now even more fierce than before with everyone being deserving of a shirt it is now becoming even harder to pick that starting 11.  It is a good problem to have coming into the business end of the season.