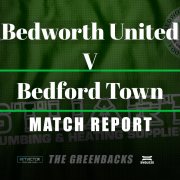 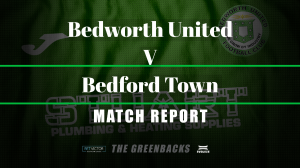 Battle of The Beds

With both sides being confused for the other all season wherever they have travelled it was the day that finally the best Bed team in the league could be crowned.

Bedford Town travelled up the M1 to face Bedworth United on a day that a lot of games would be called off across all leagues due to torrential rain but as always the Bedworth pitch was pristeen and the game was never in doubt.  Bedworth started the game looking the more dangerous with a succession of corners which Bedford were having trouble defending some goal line blocks and one particularly good tip over from Dillon in the Bedford goal kept the scores level.  The deadlock though was broken in the 18th minute when Bedford on the break were awarded a penalty when Punter was adjudged to have brought down Hall in the penalty area which Hitchcock duly dispatched low to Cranes left.  Bedworths reply though was instantaneous  and within 2 minutes were back level when a Blackmore freekick was headed by Piggon past Dillon to restore parity.  Piggon and Bailley-Nicholls both had chances to put Bedworth into the lead but were unable to finish off some good moves the at the Greenbacks created.  It looked as though it was going to be all square at half time , but with less than a minute on the clock Rowe crossed into the box and Parrott still up from the corner seconds earlier was there to send the Greenbacks in at half time 2-1 to the good.
Half Time Bedworth United 2 Bedford Town 1
After the break Bedford came out a more determined team and put Bedworth under a lot of pressure early on Hitchcock should have have equalled the score but was denied by a fine save from Crane.  With Bedford pushing forward it left gaps at the back which Blythe spotted releasing Troke whos cross was met by the head of Bailey-Nicholls to give Bedworth a 3-1 lead.  Bedford though weren’t out of this yet and continued to put pressure on the Bedworth back line.  With half an hour left on the clock the ball fell to Tomlinson whos shot wrong footed crane skidded off the surface and into the net to give Bedford hope,  Ten minutes later Bedford were level when a shot from Walker was deflected past Crane to equal the score. Both Troke for Bedworth and Vasey for Bedford could have taken all 3 points for their respective teams but both fluffed their lines and blazed shots over.  Final score 3-3 in an entertaining if wet afternoon at The OVAL
Final Score Bedworth United 3 Bedford Town 3