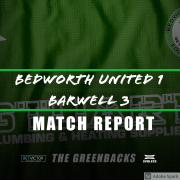 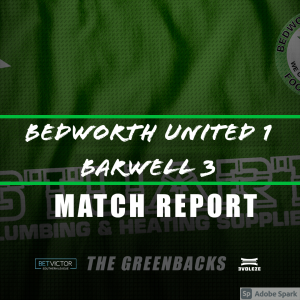 Bedworth travelled the short distance to face Barwell in the 1st qualifying round of the Emirates FA Cup, Stu Storer made 3 changes from the side that drew 1-1 with St Neots last Saturday.  In Came Dawson, King and Rowe with Steele and Truslove dropping to the bench and Barnett after his man of the match display against St Neots unavailable due to personal reasons. Bedworth kicked off playing down the slope and  both teams started with attacking intent with King causing trouble for Barwell on the Bedworth right whenever he got the ball. With the game flowing back and forth Bedworth were slowly getting a foothold working the line on the right hand side to maximum effect.  Then with just over 15 minutes played the first setback for the Greenbacks happened when the impressive King when blocking a cross got caught and was unable to continue and was replaced by Steele.  Bedworth continued to push forward and press the Barwell back line whenever they got the ball, Dawson being a continual thorn in the Barwell centre backs side all evening with his pressing and pace and it was his pace that led to the Bedworth goal when he was put through one on one with the Barwell keeper who came out and in what can only be described as reckless flattened Dawson the referee had no hesitation in pointing to the spot but to the surprise of everyone in the ground didn’t produce a card of any colour.  Piggon stepped up and put the ball on the spot and dispatched the penalty to the keepers left who guessed the right way but could not keep the ball out of the net.  Barwell started to apply some pressure with ten minutes of the half remaining but the Bedworth defence held firm and Bedworth went into the break 1 goal to good and throughly deserved their lead.

With the half only seconds old Setback 2 and 3 for the Greenbacks happened with both Piggon and Blythe having to come off with injuries to be replaced by Keen and John.  Barwell started the second half much better than they played in the first and with the slope in their favour started to get a foothold in the game pushing the Greenbacks back.  It wasn’t all one way though as Dawson as busy as ever with still making life difficult for the Barwell defence not allowing them a second on the ball. With the clock seeming to take an age to tick down and 15 minutes remaining Barwell eventually wore the Greenbacks defence down and in rather fortuitous circumstances equalised when a ball into the box seemed to confuse everyone and bounced in front of the Barwell substitute who headed the ball into the net.  Seconds later Barwell were in the lead when a corner was cleared fired back into the area where Crane saved it but the ball agonisingly broke free the the same player who put the ball away again.  Bedworth huffed and puffed through the next 10 minutes and it looked like they might have been thrown a lifeline when from a corner it was clear that Keen was hauled to the ground but the referee waved play on.  With seconds of the game left Barwell secured the tie when they broke and Dudley was a little to enthusiastic in the tackle and this time the referee did point to the spot but in Barwell’s favour.  The penalty was duly converted and there was just enough time left on the clock to restart before the referee blew his whistle to end Bedworth’s cup hopes for another season.

Man of the Match:   Dawson