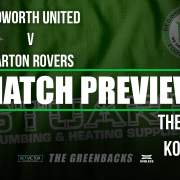 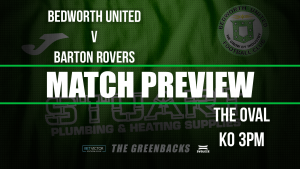 Barton Rovers travel the 66 miles to The OVAL on Saturday for the last of the busy festive seasons fixtures.  Bedworth travelled to Barton in their second game of the season and took a deserved 2 goal lead into half time after Piggon headed Bedworth in front and Rowe added the second with a free kick from the edge of the box. Somehow though after totally controlling the first half ended up losing the game 4-2.  It will be a much changed Bedworth side that will face Barton this time round with 6 of the starting 11 from that Tuesday night no longer wearing the Green shirt.

Bartons currently sit 9th in the table with a record of  7wins, 5 draws and 5 losses giving them 26 points just 2 more than The Greenbacks.  Barton had a tough game on new years day drawing 0-0 with Dunstable who are sitting 1 point above us.  Previous to that though after a difficult end to November where they lost by 4-2 to both North Leigh and Aylesbury they came back strong in December beating bottom of the table Wantage 4-1 and Kidlington 5-1.  Barton games always seem to have goals with the scoring 39 this season already, but on the flip side conceding 29 which means on average Barton fans have seen 4 goals a game this season.

Bedworth go into this game with Injury doubts from the New Years day defeat against Halesowen which saw captain Elliott Parrott, strikers Mitch Piggon and Khaellem Bailey-Nicholls all limp off, add to this Rich Blythe who was struggling from the Boxing day win against Daventry much more and Sarah the Physio will be installing a turnstyle into her treatment room.  Bedworth will be looking to put the disappointment of the result at Halesowen behind them and build on the positives that came out of the game.  The Greenbacks will be desperate to get back to winning ways and will be happy that there isn’t to long to dwell on the Wednesdays defeat before they can put things right on Saturday.  One positive for Bedworth will be the return of recently returning Luke Keen who missed the New Years day game because of previously booked commitments.