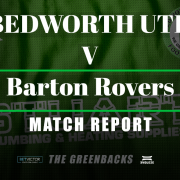 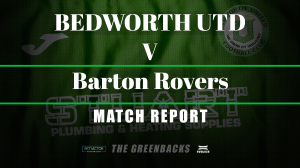 Bedworth went into the game looking to stop Barton from doing the double over them after their 4-2 loss in the reverse fixture.  Rich Blythe came into the starting 11 for the injured Khaellem Bailley-Nicholls.  Bedworth started the game straight on the front foot and were by far the better of the 2 teams in the opening exchanges and within the first 9 minutes found themselves ahead when a great 1-2 on the edge of the box saw Blythe attempt to cheekily lob Cooper in the Barton goal,  Cooper could only palm the shot over for a corner which Luke Rowe delivered perfectly for Parrott to meet and thunder his header past the Barton keeper to put Bedworth 1 nil up.  The Greenbacks doubled their lead within a minute of the restart when a long ball caused confusion in the Barton back line with Jibodu and Andrews both going for the same ball then leaving it for each other Piggon quick as a flash nipped in between the pair and finished with his left foot into the far corner of the Barton goal.  then 7 minutes later on the 20 minute mark another Rowe corner this time met by Troke to power past Cooper to put Bedworth into a 3 nil lead within 20 minutes.  Both sides had chances to put more goals on the scoresheet but neither side really troubled the opposition keeper until  2 minutes into added on time in the first half a cross from Dudley found Piggon who headed back across goal and Cooper did well to keep it out and the Barton defence then cleared their lines.

Barton came out in the second half a much different side then they finished the first and instantly went on the attack moving 3 up front they looked to play the long ball then feed off the scraps.  Pushing the Greenbacks defence deeper and deeper they got some joy when a free kick was hoisted into the back post and after a scramble in the box the ball fell to Capela who blasted past Crane from close range to put Barton on the scoresheet.  The goal seemed to spur Barton on and Crane became the much busier of the 2 goalkeepers saving from both Vincent and Palmer.  The visitors gave themselves a lifeline in the 87th minute when another freekick into the box landed at the feet of Vincent this time who fired past Crane.  The next 3 minutes and the 4 added on was backs to the wall for Bedworth with Cranereally well to tip another goalbound effort over the bar and when Crane was beaten the bar then came to his rescue.  After a penalty appeal by Barton for high boots was waved away by the referee Bedworth stood firm for the remaining minutes.  The Greenbacks came away with all 3 points after making things very nervy for themselves in the latter stages of the game.  From the 3 games over the festive program Bedworth have won 2 and lost 1 and now have a run of 3 away games at St Neots Northy Leigh and Kidlington before their next game here at the Oval on the 25th January.

Man of the Match  Luke Rowe