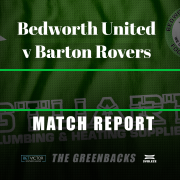 The Greenbacks first competitive game back at The OVAL since March saw us host Barton Rovers and what a game it was.  We said there was the possibility of goals as last season the 2 teams shared 11 goals over their 2 fixtures and we weren,t wrong as they shared 7 last night.

Stuart Storer stuck with the same starting 11 as in Saturdays 3-1 victory against Wantage Town.  The game started with neither team really taking charge of the game, it looked like today it was going to be the defenders turn to shine as both sets of defenders were doing well to prevent any real goal scoring opportunities with both teams being only able to get a few shots away from distance which didn’t trouble either goalkeeper.  It was Barton who had the best chance to open the scoring just before the 25 minute mark, when a ball in from the right found Hall about 8 yards out with the whole goal at his mercy but the striker blazed his volley wide.  This sparked life into the game and when Blackmore nicked the ball in the midfield played the ball out to Dawson on the right hand side,  Dawson produced a low cross which found its way through to Piggon who unlike hall didn’t miss the target and put Bedworth into the lead.  Barton pressed forward to get an equaliser with Walton making a great tackle to stop Williams going through 1 on 1 with Crane this tackle sent The Greenbacks forward again and they won a corner.  The corner was duly delivered with Cooper in the Barton goal looking odds on favour to claim it but its one that the keeper will want to forget as he missed it completely and the ball landed at the feet of Parrott who couldn’t believe his luck only had the simplest of tap ins to double Bedworth’s lead.  With a little over 5 minutes of the half to play it looked like The Greenbacks were going to go into half time with a 2 goal cushion and a clean sheet.  Tshikuna for Barton though had other ideas when he collected a ball in from the right gained half a yard and fired the ball past Cranes left hand and into the bottom corner of the net to half Bedworth’s lead.  Bartons tails were up now and had Crane not been alert enough to come out quickly and dive at the feet of Hall things might have got worse for the Greenbacks,  in fact they did a minute later when that man Tshikuna again netted for the visitors to level the scores on the stroke of half time.  Barton thought their job was done for the half with the official adding on 1 minute of extra time but after a foul on Blackmore the free kick was swung into the Barton box and confusion ensued and eventually the ball fell to Piggon who again snapped up the opportunity to blast the ball into the Barton net.

The second half started as you would expect with a Barton on the front foot looking to get back into the game but on 20 minutes it was The Greenbacks who doubled their lead when Walton crossed the ball in from the right hand side and quick as a flash the ball was in the net at the far post.  Piggon was sniffing around and initially claimed that he got a touch on it to complete his hat trick but after a closer look the ball went in straight from Waltons cross.  That was Waltons first goal for The Greenbacks and oh how important on the night it turned out to be.  Barton started to turn the screw and brought on attacking options to try to get themselves back into the game.  They nearly did when they broke free one on one with Crane and the veteran shot stopper stuck out a left leg and prevented a sure fire goal for Barton.  Crane became increasingly busy with him having to punch clear a couple of crosses and making one full length save to his left from Osubo.  it looked like the points were going to be safe as the clocked down but with 4 minutes left a ball into the Bedworth box was met on the volley by Regis the initial shot was blocked by Parrott but the rebound fell to Regis who put the ball away at the second attempt. with 2 minutes to go Smith for Barton hit a 30 yard screamer and with Crane rooted to his spot the ball hit the post and the vibrations were heard all round The Ground.  With the referee signalling that there would be an extra 5 minutes Barton looked to push forward to claim that all important equaliser and preserve their unbeaten league start but Bedworth managed the final minutes and in turn held on to all 3 points and their own unbeaten start,which at this early stage of the season saw them go top of the league.

Man Of The Match  Mitch Piggon for his nearly hat trick and continually making the Barton back line uncomfortable with his aerial ability and hold up play.