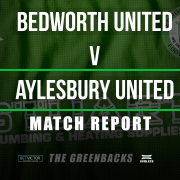 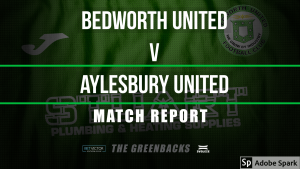 After the last 2 games being draws Bedworth were looking to get back to winning ways.  The only change from last weeks draw at Bedford was Lynus KIng being promoted from the bench in place of the absent Ricardo Dudley, with Mark Albrighton providing cover on the bench.

The game had a controversial start, as a ball over the top saw Akintunde get ahead of Elliott Parrott, with Parrot tustling to get back he was adjudged to have pulled back his opponent as he attempted to reach the ball. The Referee Tom Bowkett gave the Elliott the benefit of the doubt by issuing a yellow instead of a red card, adjudging that Akintunde wouldn’t have reached the ball before Greenbacks stopper Dan Crane collected it. From the resulting free kick, 20 yards from goal, Max Hercules effort sailed harmlessly over the bar.

Bedworth’s first attempt on goal came in the 11th minute; a cross from the right by Lynas King met by the head of Luke Rowe, but his effort cleared the crossbar. Both sides knew that a win was what was required as both sides were looking to play forward at every opportunity Three minutes later Hercules won the ball for the visitors played it to Akintunde, who passed to August wide on the right; he hit a powerful shot which Dan Crane who has been in impressive form of late saved well.

Bedworth pushed forward winning a corner 22nd minute which was met by Parrott, forcing Hopwood into a fine save, tipping the ball over the bar. There was a brief delay in play after this, as Hopwood received treatment for a hand injury. With no reserve keeper named on the subs bench Aylesbury were looking anxious but Hopwood recovered to face the second corner in quick succession. Reece Blackmore’s corner was again met by Parrott, this time his header fell to Liam Truslove, who hit the ball as it was rising from the knockdown it wasnt the cleanest of strikes but it did go past Hopwood to open the scoring for the Greenbacks.  Truslove cant stop scoring at The Oval at the minute that being his 3rd in 2 games.

Bedworth were dominating play by now, with the Aylesbury struggling to get a grip in midfield, Reece Blackmore played extremely well in the middle and was in most of the home side’s attacking play. Blackmore delivered a free kick from wide on the left touchline which was met Truslove, but his header was too high to trouble Hopwood. On the half hour, another Blackmore free kick was met by Parrott, this time his goal bound effort was deflected wide by Bewley to ensure that the Greenbacks went in at half time just in front by the narrowest of margins.

The second half started with the Aylesbury much more dominant. Just two minutes in and French fired a fine effort from 20 yards that was deflected wide of the near post. Five minutes later French played the ball towards Hercules who was stopped by Punter illegally in the referees eyes 25 yards from goal. Hercules took the free kick himself, but fired it straight into the wall.

On 55 minutes though Bedworth on the break could have doubled their lead; a crossfield ball found King, who beat Bewley and fired a shot to the near post which was beaten away by Hopwood. Shortly after, a free kick was awarded on the edge of the Aylesburys penalty area, which Hogg took quickly, spotting Akintunde in space on the half way line. He advanced clear of the defence but Parrott got back well to deflect his shot narrowly wide of the near post to prevent Crane having to make the save.

Osbourne a substitute for Aylesbury won the ball on the touchline and played it towards Akintunde. The striker took a touch and shot from 20 yards across the face of goal and out for a goal kick. Just past the hour mark Jones on the right crossed to the centre of the penalty area, where Hercules rose to head the ball, but it was straight at Crane who saved comfortably.

A second controversial moment in the game occurred moments later when Wood was injured in a collision in the centre circle, but play continued with The Greenbacks switching the ball wide on the left. As the Rowes cross came into the penalty area towards a Keen, the referee chose to blow to halt play for Wood to get treatment.  The timing of the whistle could not have been any worse for The Greenbacks as per the letter of the law the drop ball was given to Aylesbury in the box.

On 69 minutes, Dan Cranes quick thinking nearly doubled Bedworths lead when he  launched a long ball forward which was misjudged by both Jenkins and Hopwood, allowing Rowe to advance on goal, but the keeper redeemed his mistake by coming out to block the effort on goal and prevent his side from going 2 down.

Aylesbury were at this point a much improved team from the first half. On 70 minutes Osbourne picked out a pass to Akintunde who broke free of the Greenbacks defence only to see Dan Crane off his line quick to close him down on the edge of the penalty area and claim the ball well.

The next attack saw a cross into the Bedworth box again this time met by August, but he could only direct his header at Crane.  Bedworth seemed to then lift themselves after conceeding and went back on the offensive

With 10 minutes left, a ball in to Luke Keen on the edge of the penalty area saw him lay the ball off to Rowe, but his shot from 20 yards was too high to trouble Hopwood. From the next attack, Blackmore won the ball again the midfield as he had done all day,  played it to substitute Mitch Piggon in the left channel just as he shaped to shoot, Wood got back and blocked the shot.

With 6 minutes left on the clock Jones gave the ball away 25 yards from goal the ball was collected by Alex Troke who passed to Rich Blyth just outside the penalty area. Blythe dummied to shoot leaving both Jenkins and Bewley on their posteriors when he did shoot it wasn’t the best of connections but Hopwood in the Aylesbury goal seemed totally misjudge the shot and alloed it to go through him to send Rich Blythe on an Alan shearer style celebration.  It wont be a contender for goal of the season but it could be one of the most important.

All Bedworth had to do now was hold on for 6 minutes plus what the referee added to move themselves within 2 points of Aylesbury for that final playoff with a game in hand against the visitors.  The Greenbacks rode out the final few minutes in a professional manner not allowing Aylesbury the chance of a second equaliser.

Man of the Match  Reece Blackmore