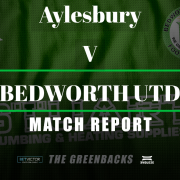 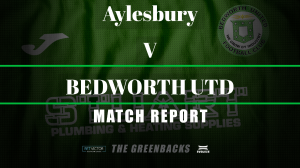 Bedworth travelled to their longest away trip of the season on Saturday to Aylesbury who are currently sharing a ground with Chesham.  The Greenbacks started well with Mitch Piggon winning 90% of the ball in the air and flicking on well.  One such flick put Bailey-Nicholls through but his shot was saved well by the feet of Hopwood in the Aylesbury goal.  Bedworth were doing well keeping Aylesburys chances to shots from distance.  It was though Bailey Nicholls who broke the deadlock in the 20th minute when a ball from Troke found him just outside the Aylesbury box he shot low and hard and watched as the ball creeped just inside Hopwoods right hand post. Bedworth had further chances to double their lead with both Bailey-Nicholls and Piggon having chances but missing the target.  Aylesbury came into the game towards the end of the second half but Bedworth defence was resolute and kept the Greenbacks lead going into half time.

The second half started with Aylesbury searching for the equaliser and when it came what an equaliser it was the ball fell to Sonny French who let fly from fully 35 yards and it swerved and dipped over Crane to even the score.  Bedworth looked shell shocked and worse was to come with 20 minutes to go the same player then found himself on the edge of the box and again let fly this time arrowing the ball past Cranes right hand to give Aylesbury the lead.  Things went from bad to worse then for the Greenbacks when Dan Preston was shown a straight red card for bringing down Sonny Williams when he was through on gaol.  Bedworth though didn’t roll over and carried on pressing and had a few chances to grab an equaliser,  in the final minute Crane went up for a wide freekick caused havoc in the Aylesbury box the ball bobbled around but a yellow shirt could not get the final decisive touch.

Watch the highlights of the game below