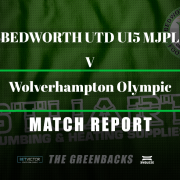 Bedworth travelled the hour to Wolverhampton Olympic to face a team who had a similar run of results to our own. Bedworth again started slow allowing Olympic to take the lead after only 9 minutes.  This sparked the Bedworth boys into life and within 5 minutes had equalised through John Patten. Bedworth were buoyed by the equaliser and within 7 minutes had doubled their score to put them 2-1 in front when Kyle expertly finished a great team move. Things got even better for the boys in Green when on the half hour John Patten hit a sweet shot that firmly put Bedworth into the lead.  With the time ticking on towards half time it was again Bedworth that shot themselves in the foot when the ball was given away cheaply in the midfield to allow Olympic to break at pace against the 2 centre backs and the ball ended up nestling in the Bedworth net.  It was Olympic this time that were lifted by a goal and with the last kick of the half equalised after another mistake by Bedworth.  Half time the score was 3-3 and Bedworth were deflated as they knew that they should have gone into the break firmly in the lead.

The second half started an even affair with neither team troubling the opposition keeper. It was Bedworth though that would break the deadlock again when Kyle was one on one with the Olympic keeper and finished well to put Bedworth back in the lead with time nearly up it looked like the lads would get their first points on their travels but it was not to be with only 3 minutes left on the clock. Olympic were awarded a penalty which Harrison did well to push onto the post but Bedworth didn’t react and the rebound was put into the empty net with Harrison still on the floor after his fine save.  Things then went from bad to worse for the lads in green with less than 30 seconds left A Wolverhampton player picked the ball up 30 yards out let fly and watched the ball soar into the top corner of the Bedworth goal.  With just enough time to restart the ref then blew his whistle to end the game.

Yet again individual mistakes cost us not just at the back we had chances to put the game to bed which we missed, the midfield were slow to react at times and were waiting for the ball rather than coming for it as a team we need to concentrate and be on it for the full 80 minutes as we are getting punished by switching off.