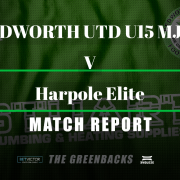 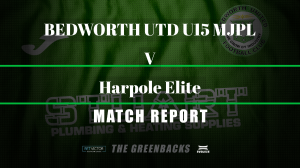 Bedworth travelled to Harpole on Saturday morning to face a team who were on paper very equally matched with the wins losses and points columns all reading the same.  Bedworth were looking for their first away points of the season.  So far Bedworths season has stuttered with good results at home but poor performances away leading to a zero in the away wins column.

Bedworth went in to the game very light on players with Travis, Owen and Raees all unavailable due to injury, that left us with a bare 11 and the still recovering JT as our only sub.  The game started with both teams having good spells of pressure but neither really tested the keeper.  On the 11th minute mark though a well delivered corner by Luke Stewart was met by Kyle who bundled the ball across the line to give Bedworth the lead.  The rest of the first half was played out mainly in the midfield with neither side really testing the oppositions keeper.  Both defences were solid with Bedworth playing a back 3 of Nash, Alex and Josh P with Josh B and Luke doing really well as wing backs Bedworth looked like a solid unit and didn’t look like conceding.

The second half started with Harpole looking for that all important equaliser but the back 3 of Bedworth were defending well and didn’t look like they were going to concede no matter what Harpole tried. On the hour mark Bedworth were forced into a change bringing JT on in place of Josh B who after an awkward landing had to go off, after a visit to hospital it was confirmed that he had fractured his collar bone.  As is the ruling in junior football if after a serious injury the affected team do not want to carry on the referee has the power to abandon the game and the result would be a draw,  We were offered this but decided that we would carry on the game to its natural conclusion. Bedworth knew that at 1-0 the game was still in the balance but on the 68th minute Bedworth doubled their lead in fortune circumstances.  A free kick just inside the Harpole half out on the left was floated in by Luke,  Kyle made a run across the keeper who thought he was going to get a touch on it but the ball missed everyone and curled into the far post to make the score 2-0 and give the lads in green a bit of breathing space.  With Harpole pushing forward to try to get a foothold back in the game Bedworth started to exploit the space that was appearing and after a good piece of 2 touch football in the 72nd minute Kielan found space in the Harpole penalty area and finished well to put the game beyond the home teams reach.  Bedworth learnt from last weeks game and managed the final 8 minutes well not allowing Harpole any chance of a grandstand finish.

Bedworth will be happy to have picked up their first away points of the season and break their run of away defeats, It was also pleasing to keep a clean sheet if we can continue to play at this level every week then we will start to move up the table rapidly.  It is unfortunate that we have lost Josh B for up to 6 weeks with his collarbone injury and we all wish him a speedy recovery.  It was pleasing to see JT get a little bit of game time but he is still a little off the pace, his introduction will have to be slow to break down the mental block he has about trusting his knee after being out for so long.

Man of the match went to Luke Stewart who had a hand in the first goal and scored the second but the key thing was that he kept Harpoles danger man quiet for the whole game and ensured that he could not dictate play for them.