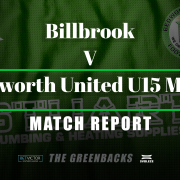 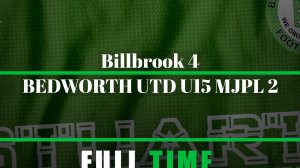 Bedworth travelled up the M6 to face Billbrook knowing that they are an accomplished MJPL side who have finished in the top 5 for the last couple of seasons.  Bedworth were without the ever energetic Kyle Rogers due to an injury sustained at school so the Bedworth team were already a man light.  Bedworth suffered another injury blow within 2 minutes of kick off when Raees Vorajee had to come off with a back injury . Saying that though lads started the game the strongest and bucked the trend of recent games and took the lead early on when John Patten was put through one on one with the keeper and slotted home to put Bedworth in the lead with only 3 minutes played.  the lead though wasnt for long as Bilbrook equalised in the 10th minute when a mistake at the back allowed the BIlbrook striker too much space and he picked his spot leaving Harrison no chance.  The lads playing in their away strip of red soon took the advantage again within 3 minutes of being pegged back the ball bobbling around in the Billbrook area fell to John Patten who lashed it home to put the Greenbacks back in front. The lead like the last time only lasted 2 minutes with Bilbrook again capitalising on a defensive mix up to again equal the score.  with only 15 minutes gone and 4 goals scored it looked like the game was going to be a very high scoring affair, The rest of the first half was played out with both teams having opportunities but not being able to beat either keeper.

The next goal was always going to be important to the game and it looked like Bedworth were going to capitalise,  A poorly timed tackle by the Bilbrook centre back on Nash Asquith give Bedworth a chance to take the lead within 2 minutes of the half starting from the spot. This led to another injury as Nash landed awkwardly and had to be replaced due to him struggling with his hip,  With Luke Stewart also struggling with his back that left us no options on the bench.  Unfortunately for the Bedworth lads the keeper was equal to the penalty and kept the scores level.  They didn’t stay that way for long though as Bilbrook won a corner which was swung in and headed home to give Bilbrook the lead for the first time in the match.  Bedworth huffed and puffed and it seemed like the penalty save had took a bit of the belief out of the Bedworth boys that they can compete with the better teams in this league. With Bedworth pushing forward looking for the equaliser gaps were appearing and with 18 minutes to go Bilbrook sealed the win with a 4th to make the final score 4-2 to the home side.d

The Bedworth lads can be proud of their performance today if we cut out the individual errors and be a bit more clinical in front of goal the scoreline could have easily been reversed against a side that have always done well in this league. Next week we look forward to a trip to Aylestone giving the Greens their first trip into Leicestershire.  Aylestone will be another tough test having finished forth last season but if the lads all perform as we know we can and cut out some of the mistakes and all work hard we no doubt can give Aylestone a game and maybe spring a surprise on them.