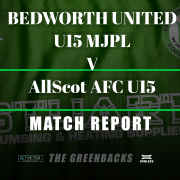 After last weeks defeat in the first outing in the MJPL the lads knew what they were up against and were much more prepared themselves mentally, the nerves that were shown the week before in the changing room had gone and normality resumed with the normal characters full of banter and laughter and in familiar surroundings the game had the potential to be an entertaining one.

With a slight tweak in formation the team was set up to not concede early and to grow into the game.  The game started off with both teams having their share of the ball but neither team really troubling either keeper.  It was Bedworth though that should have been in front squandering some good chances.  The lads were doing exactly as we had talked about keeping calm and not trying to win the game in the first 10 minutes.  The first half went by with Bedworth by far the better team but just couldn’t find that cutting edge in the final third.  The back 4 marshalled well by Harrison who is now adding a voice to his game were more than equal to anything Allscott had to offer.

At half time a few changes were made and the Bedworth lads were told to put that extra 5% in and then they would win it took them 17 minutes of the second half to get on the score sheet even though by that point they could have been 2 or 3 up already.  It was John Patten that  broke the deadlock to put the boys in green in the lead, the first goal was always going to be crucial as the team that conceded it would then have to chase the game and leave gaps.  It was one of these gaps that allowed John Patten again to break free from his marker and just as he was about to pull the trigger the defender could do nothing else put push him to give Bedworth a penalty which John himself converted,  there were no complaints from Allscott it was the most obvious penalty you could have seen. then with 3 minutes on the clock left Bedworth broke again for John Patten to complete his Hat trick.

It was good for the lads to get their first 3 points in the MJPL and especially with a clean sheet to bring back some belief that they deserve to be here and can compete.  The lads will only get better the more they play with each other and you can see that developing.  Playing on The OVAL will be the difference in a few games being used to the surface will help us and it works to the style of play we are aiming for.