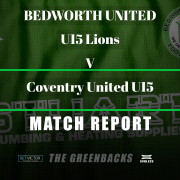 Historically the Lions have always under performed in this competition having never got past the first round.  Everytime we have played Cov United the games have been closer than the previous scorelines suggest.

The Lions started slow and within the first 7 minutes found themselves 2 goals down the first being within the first 60 seconds. the lads were struggling to get their passsing game up and running on the grass pitch and weight of pass was letting them down.  Saying that though Bedworth did manage to get a goal back 3 minutes after Cov united scored when Raees made himself a yard of space and fired well past the Cov United keeper. The boys in green started to claw their way back into the game and put the Cov United back 4 under pressure but they were doing a good job at keeping their slender lead not always fairly as was highlighted by the number of free kicks the Lions were winning.  With 10 minutes of the half remaining though the scores were levelled, when again Raees managed to fire the ball past the Cov United keeper who deserves credit for keeping their lead intact with saves from Kyle John and Travis until the equaliser came.

The second half started very much one way traffic with the Lions looking for the goal to put them in front for the first time in the game.  It eventually came just after the 45 minute mark when Kyle put the ball in the net,  The comeback was complete.  The lions sensed blood and went for the kill but a mixture of poor finishing and the Cov Utd  keeper being equal to everything that was thrown at him the Lions could not build on their lead and with the clock ticking down it was all about game management which the lads done well to see the game out with no real threat to Harrisons goal.

History was made with the Lions progressing for the first time to set up a mouth watering tie against none other than Bedworth United Juniors.  There was a lot that the lads need to learn from that game we need to start on the front foot and not concede early games and also to play to the surface knowing that the grass pitches wont roll like The OVAL and to adapt to them. Luckily the lesson didn’t cost us and we can now look forward to being back in league action next week and we face Coventry Sphinx Juniors away.