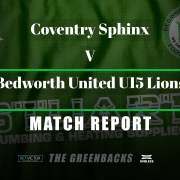 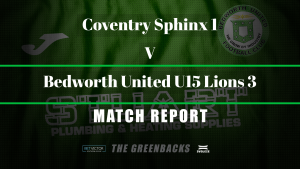 Sphinx having done the double over The Lions last year were looking to pick up their first 3 points of the season after losses against Alvis and Kenilworth.  The Lions were looking to continue their unbeaten run.

The Lions went into the game missing Raess with his back and a heavily bandaged Kyle.  Luke’s back was good enough for him to play and Nash had recovered from the day before to start.

The game started as have most of the Lions game slow but this time Harrison and the Bedworth back 4 of Charlie Alex Josh P and Owen were solid and kept sphinx at bay as the half progressed Bedworth by far became the better team with the Sphinx keeper being by far the busier of the 2.  Kyle did get the ball in the back of the net for Bedworth but this time was beaten by the linesmans flag.  The Lions were then hit by another injury blow when Alex had to go off after a clash of heads. That meant a reshuffle at the back with Charlie dropping into the centre and Josh B going out on the right.  The half went by quick with both defences coming out on top but with the feeling that The Lions hadn’t reached top gear yet.

The Lions came out in the second half after being told to up their game and play at 100% rather than 80%, but with a minute of the half gone it was Sphinx who opened the scoring and from that moment on they were looking to defend that 1 nil lead till the end, time wasting started with still 39 minutes to go.  The goal shocked The Lions into life and they started to dominate with Kyle, Travis and John all coming close to get that all important equaliser.  With the Sphinx defence getting deeper and deeper trying to hold on to their lead the midfield became a lot less congested and allowed the Bedworth boys more space to play, It was one of these moves that led to the Lions equaliser on 56 minutes.  Nash picked up the ball and released John on the left who played the ball to the far post to pick out Euan who hammered the ball past the Sphinx keeper to level the scores with just over 20 minutes left to play.  The next goal would be crucial and whoever scored it would no doubt go on to win,  and it was The Lions who got it.  5 Minutes after they equalised they took the lead for the first time when the ball ended up out on the left with Luke who took a touch got it out his feet and unleashed a shot that beat the Sphinx keeper.  Sphinx did try to rally but the back 4 and Harrison were equal to anything that Sphinx threw at them and never looked like conceding another.  It was Bedworth though that put the game beyond doubt in the 63rd minute when John Patten added the 3rd to seal the 3 points.

A good second half performance for 39 minutes secured the points for The Lions on the day, we still need to play at the high tempo we did after we went behind from the start of games as against some teams we wont get that chance to get back into the game after going behind.  A good start to the season so far though sees us sitting second in the league with a game in hand against the rest of the top 4.  Next week sees us resume hostilities with Alvis the only other team who are still unbeaten in the league.  Alvis will be out for revenge after we beat them twice at the Mount Nod tournament, but tournament football is very different to 80 minutes in the league.