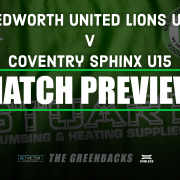 The Lions travel to Sphinx this Sunday in a fixture that has always provided close games. Sphinx have struggled in the first 2 games of the season losing to heavily 8-0 to league favourites Alvis and then narrowly 1-0 to an organised Kenilworth side,  However Sphinx are not a team to be under-estimated and have featured in the A league every season since they got promoted as Runners up in the B league at U12 level and have since then always finished high mid table between 4th and 6th.  Last season they finished 4th behind Sphinx White, Rugby Pumas and Alvis with both Sphinx White and Rugby Pumas not featuring this season they will be looking to be there or thereabouts come then end of the season.

Bedworth have a 100% record so far this season with narrow victories over Coventry Copeswood in the league and Coventry United in the Nursing Cup.  Bedworth are looking to keep growing into the season, having been slow starters in both games so far, we are looking for the lads to look at their second half performances in both games and build on them as in both games we have looked by far the better sides in the second halves and should have won both games by much larger scorelines than the odd goal has suggested,  we have wasted chances and also came across 2 very good goalkeepers who have put in man of the match performances for their sides to deny the Greenbacks.  The lads are starting to get a much better understanding of each other and the new signings are now gelling much better with the rest of the team.  We will be looking on Sunday to start well and continue to get better as the game go on as we don’t want to be continually chasing games all season, the coaching staff will have a coronary if it continues.

Bedworth are already playing catch up with league games due to the Nursing Cup so league standings will be a bit jumbled until games are caught up. but at the moment we are sitting 3rd having played a game less than the 2 teams above us.