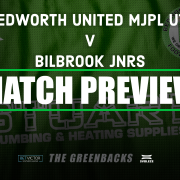 Bedworth make the journey up the M6 to face Billbrook FC who on paper look to be the strongest opposition posed since joining the MJPL. Billbrook with a record of 14 wins, 3 draws and 5 losses amassing 45 points finished 5th last season. So far this season though Billbrook have had record similar to ours picking up all 3 points in a 6-0 win against Droitwich Spa Boys and Girls but then losing 3-1 o league newcomers Basford United Community and Youth in their second game.

Bedworth will be hoping to build on their first win of the season last week however will need to start stronger than they have been thus far as chasing games in this league is extremely difficult, we need a performance like last week when we worked our way into the game and kept it tight early on.  If the boys go out with the right attitude and mentality then every team in this league should fear us BUT if the lads aren’t committed from Friday night going to bed early then we will struggle.

We have a full strength squad to pick from and will be looking to rotate constantly to keep everyone at as close to 100% as we can,