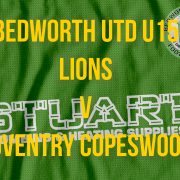 First game of the Coventry and Warwickshire season was against a team that the Lions have a little bit of history with after losing 4-2 last season at Copeswood and drawing 1-1 at The OVAL it was always going to be tight opening game with both teams desperate to get 3 early points on the board.

Bedworth started slow with Copeswood having the majority of the possession and without Harrison making a couple of early saves and Charlie Alex and Josh the Bedworth back 3 making some great challenges Copeswood could have easily taken an early lead.  With the Copeswood coaches putting pressure on the referee like they always do by calling and disputing every decision the Bedworth lads looked rattled by the verbal volley,  but it was the Bedworth boys who scored first when John P ran onto a defence splitting through ball from Kyle rounded the keeper and put the ball into the empty net to send the Bedworth supporters wild. The celebration though was short lived when Copeswood equalised the minute after when a hopeful ball into the box was controlled well by the Copeswood player and his second touch fired the ball beyond Harrison from 3 yards out, then to make matters worse for the boys in green Copeswood took the lead when Bedworth didnt pick up the runner from a corner who headed home to put Copeswood into the lead.   The rest of the half was played out mainly in the midfield with both teams giving away free kicks and fouls the Copeswood bench continually trying to bully the ref saw both benches collide when the Bedworth trio had words with them. The whistle for half time went with Copeswood in the lead and marginally being the better team of the half

Half time the lads were deflated by their performance and went out the second half to show what they are really capable of, the lads in green were not going to be bullied this half and started strongly and were on the front foot they were unlucky not to equalise on a number of occasions with Travis, Kyle and Nash all going close. It was John P though from the spot who equalised in the 59th minute when Travis twisted and turned his man on the right of the Copeswood box beat him with a lovely bit of individual skill drove into the box and all the defender could do was bring him down, the referee had no hesitation to point to the spot, John P stepped up and after a short run up powered the ball to the keepers left giving him no chance.  Copeswood then couldnt believe it when 4 minutes later Nash received a bouncing ball 20 yards out which he hit with a looping shot that seemed to take an age and dipped just under the Copeswood bar to give Bedworth the lead with 15 minutes left to play, Instead of just playing the time out Bedworth still went on the attack with Kyle chasing every ball defending from the front Copeswood didnt really get a chance to get any attacking play when they did the Back 3 of Alex Charlie and Josh became an impenetrable wall with Alex not missing a header Josh and Charlie putting challenges in like their lives depended on it and the one chance Copeswood did have from a stray back pass to Harrison was quick to react and snuff out the danger. The refs whistle went on a game that had everything with the 3 points staying at The OVAL the mood was raised.

Charlie was named man of the match for an all round impressive defensive display putting in challenges whenever needed and intelligent distribution of the ball when in possession.

Not the start to the season we were hoping for.
Scroll to top