Bedworth United are pleased to announce that Jamie Lenton, Stuart Storer and Sam Wells will be leading the Academy with support from Stu Roe.  Sarah Lissaman will be available as a physio.  There will be further staff joining who will be announced at a later date who will run Strength and conditioning and the GCSE resits for those that need them.

Jamie will be Academy Manager with Stu Storer and Sam Wells leading the football education side with Stu Roe taking on the role of welfare and tutorials. 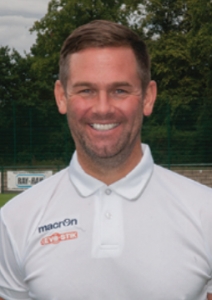 Jamie started his football career as an apprentice with Coventry City in 1993 under managers Bobby Gould, Phil Neal,  Ron Atkinson and Gordon Strachan. He remained at the club for 3 years and was released in 1996.

He trialled around several non-league clubs including Solihull Moors Worcester City, before eventually signing for VS Rugby where he played for 2 seasons. Jamie signed for Hinckley United in 1999 where he became an instant success under Dean Thomas, winning  Step 4 promotion in his first season and losing to Cheltenham Town in the FA cup 4th qualifying round. After 3 seasons at Hinckley Jamie signed a 1 year contract for Nuneaton Borough who at the time played at the top of the football pyramid the National Conference, playing against  opposition which included  Doncaster Rovers, Crawley Town, Burton Albion and Yeovil Town. Having made 27 appearances for Nuneaton and scoring 4 goals, he re-signed for Hinckley United the following season.

Jamie went on to make a record breaking 330 appearances, scoring 73 goals for Hinckley United, playing in the Conference North League and was part of the starting 11 who featured in the clubs televised FA first round fixture against Brentford, taking them to a replay and eventually losing 3-1 at Brentfords Griffin Park in front of 15,000 fans.

Jamie left Hinckley United for Leamington in 2009 where he won promotion from Step 4 with the club now firmly established in Step 2 of the non-league football pyramid, the Conference North. After 29 appearances and 8 goals for Leamington, Jamie signed for his home town club Bedworth United where he finished his playing career in 2010. Jamie proudly captained the Bedworth United team who achieved their furthest ever FA run, losing 2-0 away to National Conference team York City in the 4th qualifying round.

After retiring from the game Jamie has gone on to achieve his UEFA B Coaching Licence through the PFA at St. Georges Park and in 2019 completed his UEFA A Licence through the FA having undergone an extensive two week residential programme covering assessments and analysis with the FAs elite level coaching team headed up by ex   Manchester United Academy Coach Paul McGuinness who won the FA Youth Cup with Paul Pogba, Jesse Lingard and Michael Keane,  ironically beating a Sheffield United youth team that included Harry Maguire!

Jamie has been 1st team coach at Bedworth United for 6 seasons, working closely with Stuart Storer and Andy Penny. During their 6 seasons with the club, they have won two promotions to Step3 of the non-league football pyramid, unfortunately being relegated on both occasions the following season. The long term aim at the football club is to secure and sustain Step3 football, while developing opportunities for local footballers progressing through the Academy, U18s, U21s and into the first team.

Alongside Jamie’s semi-professional football career he is a qualified Sports Lecturer. He has worked for Coventry College for over 15 years having qualified as a teacher in 2006 with a BA Honours Degree at Warwick University. 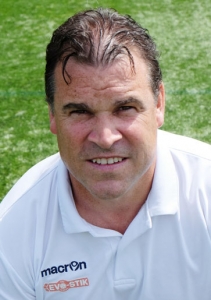 Stuart spent 19 years in the professional game and can list Birmingham, Everton, Bolton Wanderers, Brighton to name a few.

Stuart shot to fame in Brightons’s last season at the Goldstone ground in the 1996-97 season, Brighton were in danger of relegation from the  football league when Stu Storer popped up with a goal to beat Doncaster meaning the last game of the season against Hereford was a winner takes all to stay in the football league.  Brighton drew 1-1 and stayed in the football league on goal difference and since then have gone on to greater things.  Stu is a legend in Brighton and his goal is still played before every Brighton home game.

When Stuart finished his playing career  he instantly went into management, completing his UEFA A licence along the way he managed a highly successful Hinckley United Team who at that time were playing in the Conference North.  In December  2013 Stuart took the helm at Bedworth United with the team rock bottom of the league. He successfully guided the team out of the relegation places and in the season after achieved playoff success and took Bedworth United into step 3 of the non league football ladder. Stuart’s experience and knowledge of all aspects of the game is second to none. His record of nurturing young players to       develop is amazing being able to list amongst others Andre Grey  who he brought into the Hinckley side at a young age and aided his development to becoming the premier league player he is today.  Stuarts philosophy of  giving the youth and academy players a chance to play at the highest level encourages player development and ensures that Academy players are kept engaged.

Stuart studied for his BA honours in teaching and has now been a Grade 1 Tutor for 20 years working at several different education establishments, He also holds a Lvl2 in Goalkeeper coaching.

Sam has recently passed obtained a first class degree from Birmingham University in Sports and Exercise Sciences after obtaining A levels in Biology Chemistry and Maths.  Sam is currently working towards his coaching badges now that he has completed his degree.   Sam played for Leicester road all the way from Youth level through the U21s and also regularly appeared for the First Team.  Sam will bring an extensive knowledge of Sport Science to the course far beyond what any of the other tutors can and will be an asset to students not only in regards his knowledge but in passing on his experiences of University for those who are wishing to go down that route after they leave the course.

Stuarts background is very different to the other tutors having spent 19 years in the Army. After getting medically discharged after an incident in Afghanistan he became a tutor for the Princes Trust working with 16 to 24 year old’s to develop their skills outside of normal academic subjects. Stuart then became stadium manager at Bedworth United. Stuart is also a registered FA coach and manages one of the junior sides here at Bedworth. Stuart is the clubs and academies Welfare and Safeguarding Officer having completed the FA’s Welfare Officer course. Stuart is also the clubs coach mentor.   Stuart will hold tutorials throughout the course and will be the first port call for any welfare issues that students may have.

Sarah always loved football from a very early age, She played regularly until her teenage years where back then ladies  football hardly existed so she looked for an alternative way to stay involved. She      decided treating the players was the next best thing! Alongside working full time for the NHS, she qualified 15 years ago and worked pitch side at weekends with local non-league club Shilton F.C. She was approached to join Bedworth United and has been the club Physio since 2018.  Sarah will be on hand via appointments to treat any injuries received in your time at the Academy.  Sarah like all members of staff holds a current CRC and has completed the FA safeguarding course.

We also have Charlie Simpson who is on an attachment to us from Ash Green School, Charlie will be looking after the Academies social media accounts and will be the official photographer for the Academy games.

As you can see as a club we have chosen individuals with a wealth of experience not just in football but with teaching and guidance of young people to lead our Academy.  As a club we want to assist the young people of Bedworth and the surrounding area to achieve their full potential not just on the football pitch but academically as well.

Chairman Neill Rayson-Randle said “I am happy to have all of the people listed above on board,  We have put together a group of people who share my vision and drive for the club and want to ensure that as a club we achieve our mission statement of Combining first class facilities with expert tuition and coaching in a safe environment- to provide the opportunity for all our young people to achieve their fullest potential.”