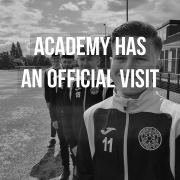 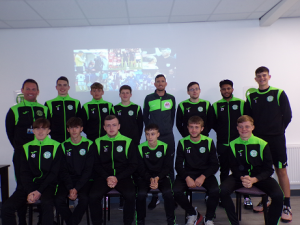 This morning Bedworth’s Academy students had a visit from Andrew Fox.  Andrew is a Match Official who regularly officiates in the Championship and has also covered a few games in the premiership.  With the deadline for the students first assignment on rules of the game and refereeing sound to be submitted it was great that they could sit with a qualified official who has officiated at such a high level.

Jamie Lenton the Academy Manager stated “To have someone like Andrew who has officiated at such a high level of the game be willing to come in and go through the pathway to refereeing, fitness tests requirements, how decisions are made and the laws of the game in general is a great coup for the academy.  Having the chance to see the game from such a professional perspective and how officials come to decisions will not only assist the students in their unit assignments but will also develop them as players to understand how and why Officials make the decisions they do, as well as those who have the potential to become referees themselves.  I would personally like to thank Andrew for his time this morning and wish him all the best for the future and hope to see him as a permanent fixture in the premiership in the future.”

Andrew has officiated at 1 U20 international, 4 Premier League matches, 171 Championship matches, 40 League One Matches, 32 League 2 Matches, 9 FA Cup, games, 15 League Cup games and 3 playoff games.   With a career covering that many games the students have had an invaluable insight into refereeing and we thank Andrew for his time.