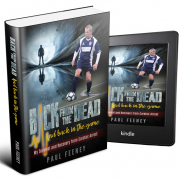 As some of you might recall there was an incident here at The OVAL some back in September 2018 where the clubs purchase of an AED (Automated External Defibrillator) led to someone’s life being saved. 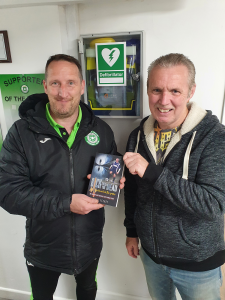 The gentleman in question Paul Feeney has since written a book about his experience during and after his Cardiac Arrest and is pictured presenting a signed copy of his book to our Stadium Manager Stuart Roe who was involved in saving Pauls life.  They are pictured next to the AED that saved Pauls life on that fateful day in September 2018 .

Paul has written his book to not only document his recovery but as a thanks to those who’s determination and quick thinking kept his heart beating and his brain filled with oxygen until the emergency services arrived.

Since his Cardiac Arrest Paul has been massively encouraging and promoting the siting of AED’s at all venues where sport is played and also been pushing the message that if you feel anything isn’t right with your chest seek help.

• What’s it like to be the victim of sudden cardiac arrest (SCA?)
• How does it feel to die and then be brought back to life again?
• When you are dead, can you see, hear or feel anything?
• Can you ever be the same once you ‘come back?’

These are the questions that only a few can answer. Those who have been the victims of sudden cardiac arrest. Who have crossed the boundary between life and death and have returned. The ‘lucky survivors.’
The author is one of those survivors.

In 2018, when Paul Feeney left home to take part in a charity walking football game, he didn’t know that within the next two hours he would be dead.
Collapsing during the game, he would lay motionless, with no heartbeat or brain function for over 10 minutes as his fellow players struggled to revive him, using CPR, ‘mouth to mouth’ and with the aid of an Automated External Defibrilator (AED.)
Eventually, through sheer determination (and with a lot of luck) their persistence would pay off as faint life signs would be detected. They had brought him back to life.
But, his ordeal was far from over. Still largely unresponsive and with his life hanging in the balance, he would then be rushed to hospital, admitted into Intensive Care and put into an induced coma.
Examined, tested and monitored for several days, the news would then be delivered, ‘heart surgery would be required if he wished to live without fear and the risk of a further SCA. And if another did happen, then maybe next time he may not be so ‘lucky.’

Back from the Dead and Back in the Game is the authors honest and moving account’ of what it was like to be the victim of SCA. Told in a way that lays bare his feelings and emotions, and with a sense of humour that was ‘his way’ of dealing with such a traumatic and life changing event. The confusion with what had happened to him. How he faced heart surgery, and the frustration of no longer physically being able to do the things that he did before.
And when the pain was over and the wounds had started to heal. How he returned back into the world again with a second chance at life, and with a determination to regain his fitness and to resume playing his beloved game of football.

‘A story that is both shocking scary and heart-warmingly inspiring, and that will bring the readers own mortality into focus, and how you can be alive and in perfect health one minute, and dead the next. All without warning, sign or symptoms.’

Pauls book titled Back from the Dead and Back in the Game: My Survival and Recovery from Cardiac Arrest is available now on Amazon please follow the link below to purchase this must read story.

May Half Term Football Holiday Camp
Scroll to top