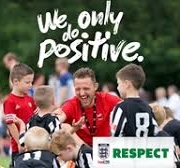 Play your part and support The FA’s Code of Respect:

Watching a lot of junior games as I do of all age groups its good to see that the vast majority of our parents and supporters are already embracing and adhering to the FA’s respect campaign but for those of you who are new to Junior football the code of conduct that we all sign and agree to when your child signs for Bedworth United is below:

• Celebrate effort and good play from both sides

• When players make mistakes, offer them encouragement to try again next time

• Never engage in, or tolerate offensive, insulting or abusive language or behaviour

I understand that if I do not follow the Code, I may be:

• Issued with a verbal warning or asked to leave

• Required to meet with the club committee, league or CFA Welfare Officer

• Requested not to attend future games, be suspended or have my membership removed

If we behave positively during training and matches our players will to, by setting a good example we will help to build a supportive environment in which everyone can enjoy themselves.

As well as you signing to agree to the above every player that signs for Bedworth United has agreed to adhere to the following FA Respect rules:

When playing football, I will:

• Always play my best for the benefit of the team

• Play fairly and be friendly

• Play by the rules and respect the Referee

• Shake hands with the other team – win or lose

• Listen carefully to what my coach tells me

• Respect the facilities home & away

I understand that if I do not follow the Code,
I may:

• Be asked to apologise to whoever I’ve upset

• Be dropped, substituted or suspended from training

If you as a parent see your son or daughter breaking any of these rules then have a word with them and explain what the consequences could be.

Its not just parents and players who have a code of conduct each coach and assistant under the Bedworth United banner has signed up to the following.

On and off the field, I will:

• Always show respect to everyone involved in the game

• Stick to the rules and celebrate the spirit of the game

• Always respect the Referee and encourage players to do the same

• Never enter the field of play without the referee’s permission

• Never engage in, or tolerate offensive, insulting or abusive behaviour

• Be aware of the potential impact of bad language on others

• Be gracious in victory and defeat

• Respect the facilities home and away

When working with players, I will:

• Place the well-being, safety and enjoyment of each player above everything

• Never tolerate any form of bullying

• Ensure all activities are suited for the players’ ability and age

I understand that if I do not follow the Code, I may be:

• Required to meet with the club or league Welfare officer or your CFA Designated Safeguarding Officer (DSO).

• Suspended by the club from attending matches

• Suspended or fined by the County FA

• Required to leave, lose my position and/or have my License suspended

If you see your teams coach breaking this code of conduct either have a word with them or speak to one of the welfare team.

You will see a lot of reference to the club Welfare Officers, We as a club are lucky in the fact that we have a welfare hub which comprises of Andy Stickley, Heidi Sloan and Stuart Roe please if there is anything no matter how trivial you think it is then approach one of us and we will look into it.  We want every player who pulls on a green shirt to most of all enjoy their time in junior football, it doesn’t last long before it becomes a distant memory and we want each and every child’s memories of their time at Bedworth United to be positive.

LET COACHES COACH don’t be that parent who constantly criticises every decision the coach makes.

They are doing their best for the team as a whole and sometimes have to make some tough decisions, remember they have volunteered to coach to enable your child to play football and do not deserve to be criticised in any way shape of form.

REMEMBER before you complain have you volunteered.