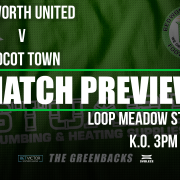 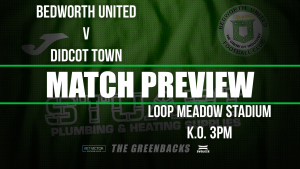 The Greenbacks travel into Oxfordshire looking to keep their 100% record against teams from that part of the country intact.  Didcot are currently sitting 17th in the league just in front of St Neots Kempston and Wantage. Didcots record this season is played 25, won 7,  drew 4 and lost 13.  When the teams played at The OVAL in October The Greenbacks ran out 2-1 winners with Reece Blackmore scoring a fine volley on 8 minutes only to see the Greenbacks pegged back a minute later.  Bedworth ran out eventual winners with a Khaellem Bailey-Nichols goal 7 minutes from time.  Didcots last 3 games have returned 4 points with a win against fellow Oxfordshire side Thame, a draw to Dunstable and a loss to St Neots.  Didcot will be without winger George Reid who scored Didcots goal at The OVAL after suffering a double fracture in his foot in the 2-0 victory over Thame, this will will rule him out for the rest of the Railwaymens season.  Didcot will be desperately looking to keep all 3 points  at the Loop Meadow stadium to keep them ahead of those below to prevent them getting sucked into what could be a relegation battle with Wantage now starting to pick up a couple of points.

Bedworths need for the 3 points is the opposite, they need them to keep the presuure on those above them in the fight for one of the coveted play off places. History seems to be repeating itself for The Greenbacks. In their last 3 promotion seasons they have started slow then had a late surge and reached the playoffs.  If The Greenbacks get into one of those playoff places it will be by the same again.  Bedworth will be looking to build on last weeks defeat of 4th place Welwyn Garden City.  That win saw The Greenbacks stay in 8th place with Yaxley, Thame and Aylesbury between them and a playoff place, with 2 games in hand on both Aylesbury and Thame and a game in hand on Yaxley they are well in the mix.  With the exception of the Dunstable game The Greenbacks have been on a good run of form winning all but 2 of their games in 2020 gaining 15 points out of their last 7 games with the only dropped points coming at Halesowen on New Years Day and Dunstable at the end of January.  Stuart Storer has a full strength squad to pick from and with every player now capable of making a difference there is a lot of competition for a place in that starting 11.

For those of you who are unable to travel you can follow the action with our live commentary by going to our dedicated you tube channel, or you can follow on Twitter for up to the minute action updates.

Why not set yourself a reminder now.   Follow the link for the live commentry     https://www.youtube.com/watch?v=QE5QuqhvJek

Due to the anticipated storm Dennis please keep following our Twitter in case of postponement.