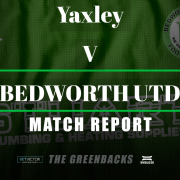 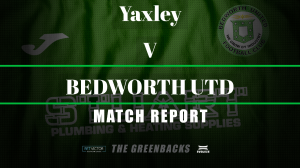 Bedworth travelled into Cambridgeshire to the Decker Bus stadium to face Yaxley in a mid table battle which both teams were looking at gaining 3 points from.  Yaxleys home form has been extremely good with them gaining all but one of their 5 wins at home.  With Bedworth not having won away since August the form book would be in Yaxleys favour.  With the fog descending and the temperature below freezing it was not the ideal conditions for a game of football.  Bedworth started well and went ahead in the 6th minute when a Luke Rowe cross was knocked down by Alex Troke to find Mitch Piggon just outside the 6 yard box who fired the ball past Butcher to put the Greenbacks 1 nil up . Yaxley started to turn the screw but the Bedworth defence was resolute and Yaxley were limited to shooting from distance and never really tested Crane.  Bedworth could have doubled their lead when Alex Troke met a cross at the far post but his header went just the wrong side of the post.  Bedworth held out till halftime and never really looked like conceding and controlled the game to finish the first 45 minutes 1 nil to the good.

The second half started with Yaxley putting pressure on the Bedworth goal but as in the first half the Greenbacks defence stood firm and limited Yaxley to taking shots from distance and that really summed up the second half.  With time ticking down Yaxley came close twice when a freekick was saved well by the feet of Crane and with the last meaningful attack of the game Yaxley won a corner which was swung in and the Yaxley keeper Butcher who had come up for the corner got his head to the ball but he couldn’t direct his header goal wards and it sailed wide of Cranes goal. The ref blew for full time and The Greenbacks travelled up the A14 with 3 points to end November on a high with an away win which lifts them to tenth in the league.

Man of the Match Cal Templeton for his dogged defensive display

For Highlights of the game please follow the link below.